How do I know if termites are eating my house?

Browse the article How do I know if termites are eating my house? 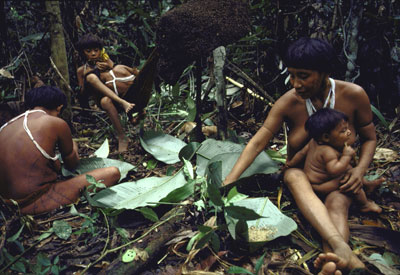 Not everyone hates termites. In fact, some people -- like these members of the Yanomami tribe in the Amazon -- find them delicious when cooked in a banana leaf. See insect pictures.
Victor Englebert//Time Life Pictures/Getty Images

You awaken. The night is still; your house is dark and quiet. Your dog groans as he stirs in his sleep at the foot of your bed. You hold your breath, listening to the deafening silence. You hear nothing but your rapid heartbeat. But you know they're there. You can sense them: termites.

It's likely every homeowner entertains some degree of concern over whether his or her house is being eaten slowly by these winged insects of the order Isoptera. An estimated $2 billion is spent annually in the United States to protect and defend homes from termites' insatiable appetites for all things cellulosic [source: NCSU]. Warding off termites seems like a Sisyphean task. Termite colonies start small but can reach populations of millions -- all working in cooperation to ruin your life [source: Su and Scheffrahn].

While humans often curse the very existence of termites on this planet, we're actually the ones to blame for their attacks on our homes. As voracious wood-eaters, termites serve a distinct purpose in forest ecosystems: They break down dead trees, allowing new ones to grow in their place [source: UGA]. When humans come along and clear forested areas to construct new homes, it's like removing a dinner plate and replacing it with an all-you-can-eat buffet of wood, wood, wood! Termites simply follow eons of survival instincts by searching out a food source.

But that's beside the point, isn't it? That food source could be your house, and you want to know whether termites have moved in and begun feasting. The thought of having to replace your house is making you jumpy -- quite frankly, you're in such a nervous sweat, it looks like you're beginning to display symptoms of hyperhidrosis. So how do you know if termites are eating your house? Find out on the next page.

Signs that Termites Are Eating Your House 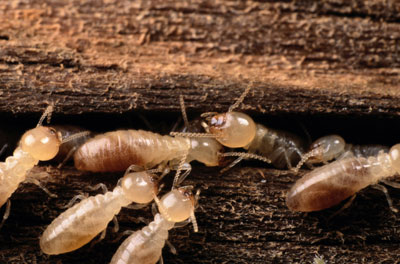 In the "Art of War," Sun Tzu wrote: "One who knows the enemy and knows himself will not be endangered in a hundred engagements" [source: Osinga]. In other words, if you're aware of both your enemy's and your own weaknesses and strengths, you'll be successful in battle. We'll move forward under the assumption you know yourself fairly well. So here's some useful information about your enemy, the termite.

These insects live in structured societies, with members divided into classes. At the top are the king and queen, and the other members of the colony are divided into reproductives and soldiers. Some types of termites also have a worker class.

Once they emerge from their eggs and begin developing wings, termites have a pretty sweet life. Wings indicate reproductive termites -- ones capable of producing offspring. Reproductives can fly off to found their own colonies once they get a little older. They usually seek out new turf in the late summer or fall and occasionally in the spring, creating swarms [source: UNL]. Swarms are your first sure sign of a termite problem -- when termites hunt in droves for a new place to establish a colony, they're hard to miss.

Once a reproductive pair finds a suitable place to live and mate, they bore into the soil or into a wood structure, seal themselves off and commence to mating. As they reproduce and their offspring learn to care for themselves, the founding king and queen stop foraging, sit back and allow their kids to feed them. Their food of choice is simple sugars, derived from the cellulose found in wood and wood products. When termites consume wood, it's digested by protozoa living within their stomachs. The waste has to come out, and unpleasant as it is, excrement is the second telltale sign that termites are sharing your home. Termite fecal matter occurs in tiny, thin strips, rounded at the ends [source: Bob Villa]. If you find tiny piles of these fecal pellets -- especially around wood -- you've got termites.

After they've burrowed into your home, termites have one of their basic needs covered: shelter. They also need food and a water source. While different types of termites need these things to varying degrees, all termites require some of each. A viable water source that can sustain a colony of termites doesn't have to be a pond or lake; even deriving water from damp wood can be enough for subterranean termites [source: LSU].

Termites require moisture because they're actually relatively fragile creatures. They can easily dry out without enough moisture. Here, we reach the third clue that you've got a termite problem: mud tubes. These hollow tunnels act as termite causeways, protecting the insects from heat and dryness as they commute between nest and food source. The mud tube is the calling card of subterranean termites, and you can usually find them running up from the ground along foundation blocks in your basement or crawlspace or inside walls in your house [source: UNL]. Follow the tunnel all the way up, and you'll see that it terminates into a floor joist or a structural beam. When you reach that piece of lumber or wood, try tapping it with a screwdriver. If it makes a hollow sound, try inserting the screwdriver; if it goes in easily, termites have hollowed out the softer inside of the wood, leaving the less delicious hard exterior.

It's at this point you should probably call in an exterminator; your enemy has established a front in your home.

For more information on pests and other related topics, visit the next page.