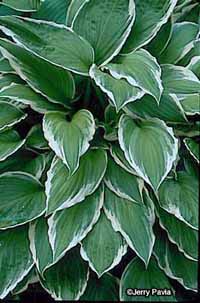 Hosta sieboldii makes a great ground cover plant, as it thrives in shade.

Hosta sieboldii is a perennial plant that prefers shade over sun. This makes it well-suited as ground cover. Like other hostas, it is also highly frost tolerant.

Violet flowers are followed by green seed pods that turn brown and can be used effectively in floral arrangements.