Browse the article How HotSpot@Home Works

Now that you have a cell phone, why do you keep paying for that landline at home? Probably because your cell phone gets terrible reception inside your house. Cell phones communicate with the nearest cellular tower via radio signals. If your home has aluminum siding or was constructed with thick concrete and rebar, it's harder for the signal to penetrate the walls [source: The-Cell-Phone-Advisor.com].

T-Mobile is not the only U.S. cell-phone provider to roll out a merged cellular/WiFi system -- Cincinnati Bell is another [source: GigaOM]. However, T-Mobile is the largest, so we're going to focus our article on the HotSpot@Home service.

Here's what you need to use HotSpot@Home:

If you already have an 802.11b/g wireless router, you don't have to buy a new one. If you don't have a router, T-Mobile sells its own wireless routers that are configured to give priority to voice transmissions over data transmissions. This could be helpful if you're downloading a large file while talking on the phone. Your call quality would remain the same and the file would simply take a little longer to download.

Setting up the HotSpot@Home service is very simple:

Now that you're connected, let's go over how to use the HotSpot@Home service.

How are Dual-Mode Cell Phones Different? 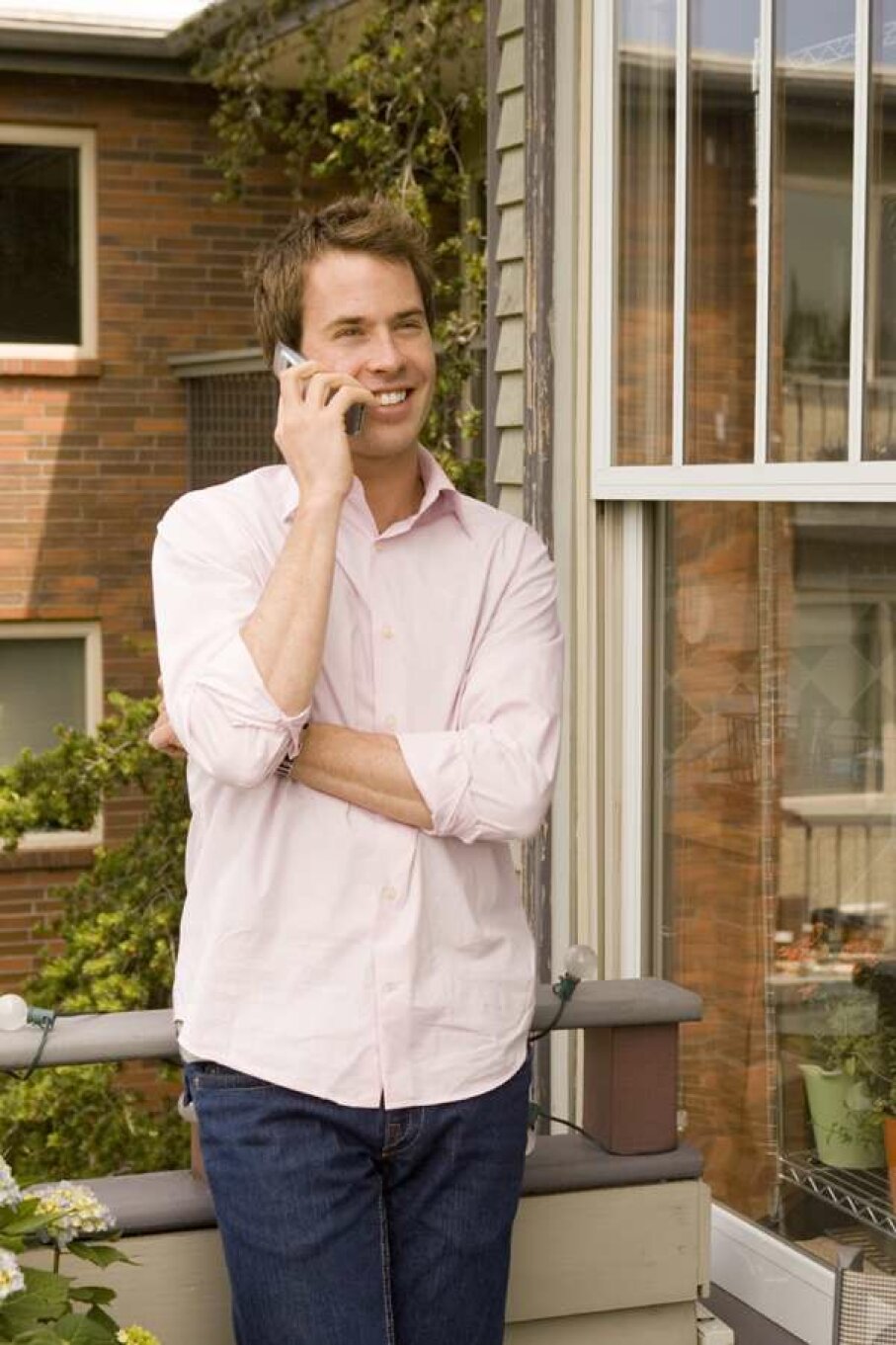 When using the HotSpot@Home service, any call you make or receive over your home WiFi network will remain on the home network as long as the phone receives a strong enough WiFi signal. If you walk out of your house and away from the wireless router, the signal strength will get weaker and weaker until the phone decides that it's time to switch to the cellular network. This is called a "handoff" and should happen seamlessly, without you even noticing the switch. [source: engadget mobile]

The same is true when you enter your house. As soon as the WiFi signal is strong enough, the phone will automatically handoff from the cellular network to the home wireless network.

There are many advantages to using a service like HotSpot@Home. Currently, the chief advantage is price. If you pay $9.99 extra a month for the HotSpot@Home Add-On, you can make unlimited nationwide calls from a WiFi network, any time of day. Calls initiated or received on the WiFi network are billed as a WiFi call even if you hand off mid-conversation to the cellular network. [source: New York Times]

For example, if you call the office from home, then leave the house and continue to talk as you drive an hour to work, the entire call is billed as a WiFi call. WiFi calls don't eat up minutes from your normal calling plan -- that is, if you've paid for the HotSpot@Home Add-On. If you choose not to buy the HotSpot@Home Add-On, you can still make calls from a WiFi network, but they'll be charged as part of your regular calling plan, meaning peak hours and nighttime/weekend minutes apply.

The other financial advantage of HotSpot@Home is that you can finally get rid of that landline telephone and all its additional local and long-distance charges.

With the HotSpot@Home technology you can make calls from any available WiFi network, not just your home network. The dual-mode phones allow you to easily search for available WiFi networks [source: Phone Scoop]. If the network requires a password, you can type it into the phone. The phone saves a list of the WiFi networks you have accessed -- along with passwords -- so that it can automatically connect to them in the future.

Additionally, T-Mobile has set up over 8,000 HotSpots across the United States in popular locations like Starbucks coffee shops and FedEx Kinko's offices. T-Mobile's dual-mode phones automatically access these WiFi networks without requiring a network search or a password. 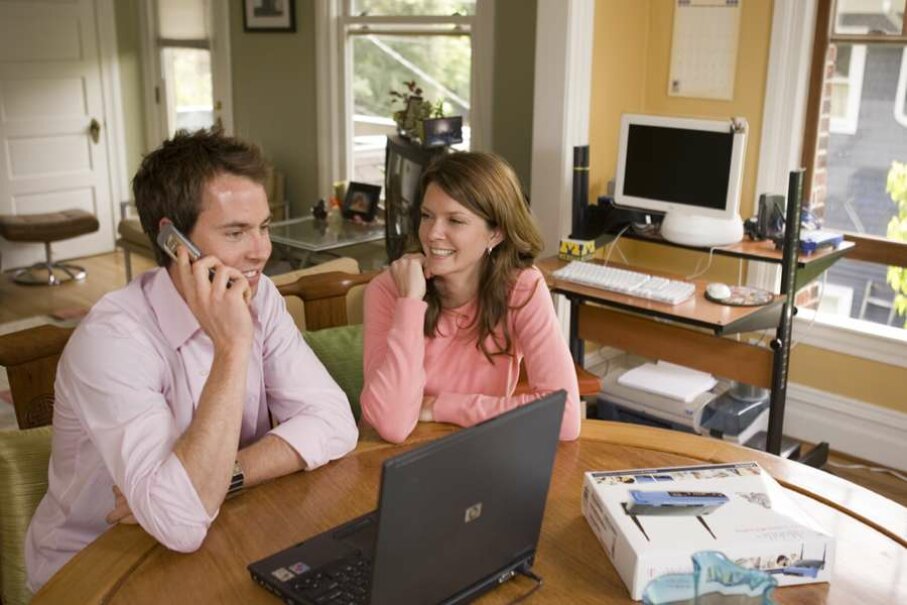 Wireless VoIP telephony uses an IP network, rather than a network of cellular towers and switches, to connect a cell phone to the rest of the cellular network. And, since dual-mode cell phones contain WiFi radios, they're able to access these IP networks through WiFi routers. For more detailed information on how WiFi VoIP works, check out How WiFi Phones Work.

Since dual-mode phones contain both cellular and WiFi radios, they're able to send and receive calls over two separate networks: the Cellular Radio Access Network (RAN) and the Unlicensed Mobile Access Network (UMAN) [source: UMA Technology]. The phone decides which network to use based on which one has the best signal strength: cellular or WiFi.

Here's how a dual-mode cell phone connects to the same mobile network over an Unlicensed Mobile Access Network (UMAN):

When a dual-mode cell phone moves out of the WiFi network's range, it automatically hands off to the cellular-radio network without any service interruption [source: UMA Technology].

Routing calls over two separate mobile networks is actually a huge money-saver for cellular service providers. The only way to improve coverage and keep up with heavy traffic on a traditional cellular radio network is to build more cellular towers [source: New York Times]. But with HotSpot@Home, T-Mobile is able to re-route a significant amount of that traffic onto broadband Internet networks -- which, incidentally, T-Mobile doesn't own and therefore doesn't have to maintain.

Services like HotSpot@Home appear to be the next big thing in telecommunications. In the already booming cell phone market, dual-mode phones are the fastest growing segment worldwide [source: cellular-news]. Infonetics Research predicts a compound annual growth rate of 198 percent for dual-mode phone sales from 2006 to 2010.

For more information on HotSpot@Home and related topics, check out the links on the next page.