Inside a Bathroom Scale 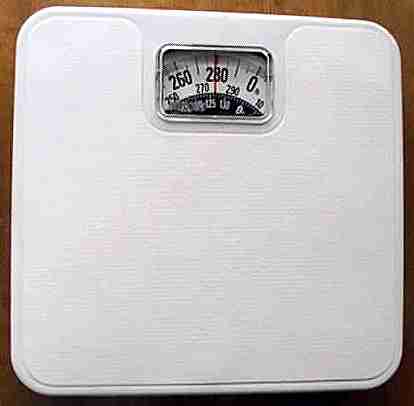 When you take off the cover what you find is a large dial, a rack and pinion arrangement that turns the dial, a spring and a rather odd arrangement of four levers criss-crossing the interior:

Underneath the top cover are 4 brackets that fit into the levers:

These brackets cause the weight on top of the scale (you) to be distributed evenly to the levers.

The four levers in the scale are designed to work like one. There are four because that makes weight distribution much easier. The levers connect into a plate at the end of a spring. The arrangement is something like this:

In this figure you can see that a long lever, fixed at the left end, has weight applied to it very close to the fixed end. At the right end of the lever the weight is significantly reduced by a ratio determined by the relative difference between the length from the left end to the weight and the distance from the left end to the right end. As you can see in this diagram, the ratio is 1:12. So if a 120-pound person stands on the scale, only 10 pounds is "felt" at the right hand end of the scale. The following three figures show the arrangement of the levers in this scale:

The two main levers end at a plate that houses the scale's main spring. Here you can see why a 1:12 ratio is used in the scale - it significantly reduces the size of the spring. The spring only has to be able to support 20 or so pounds. Without the levers, the spring would have to support 240 pounds, and it would have to be much bigger to do that. It would also have to be a lot more precise. 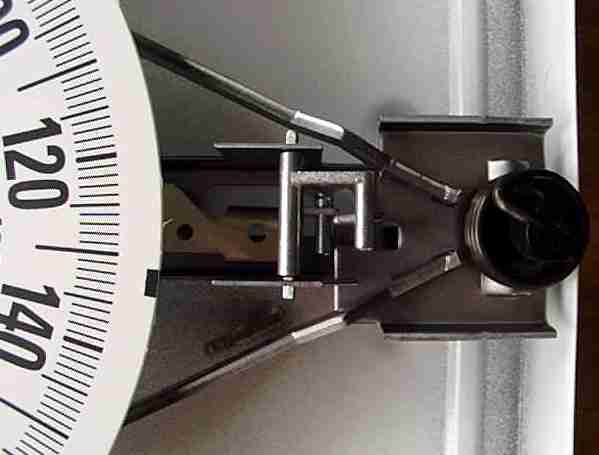 The spring and spring-plate are shown in the following two figures:

You can see that the spring plate moves up and down. This up-and-down motion is translated by a pivot into side-to-side motion. That motion is sent to a rack and pinion arrangement shown here:

The rack and pinion turns the side-to-side motion into circular motion to turn the dial.