Top 10 Perennials for the Midwest 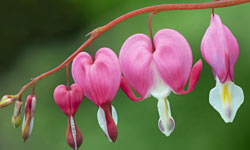 Despite its tender name and delicate appearance, bleeding heart is a hardy and fast-growing perennial that thrives in partial sun to full shade throughout zones three to eight. Certain varieties of Dicentra cucullaria, as bleeding heart is officially named, will even tolerate zones as cold as two or as warm as nine [sources: Dayton Nurseries; Midwest Gardening]. Bleeding heart typically blooms vigorously from at least May through June, with graceful clusters of flowers that cascade along curving stems. Blossoms range in color from white and pale pink to rosy pink and deep cherry red, while the fernlike foliage may be grayish green or deep green [source: Dayton Nurseries].

Bleeding heart prefers moist, acidic, well-drained soil, especially at the edges of woods where it is sheltered from high winds and early frosts [sources: Dayton Nurseries; Midwest Gardening]. The plant is native to North America and commonly found throughout the eastern United States. It can easily be divided and transplanted in the fall or spring.

Need a plant that will grow in drier conditions or sunnier spots? Take a look at the next perennial on our list.