by Heather Kolich
Prev NEXT
6 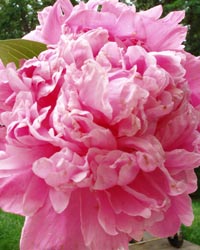 The Chinese peony (P. lactiflora) came to North America in the 1830s [source: D'Aoust]. In 1907, Cornell University endeavored to untangle the names and standardize the spelling of peony varieties. Since the popular flower had been cultivated in China, Japan and Europe for centuries, varieties and confusion were abundant. The university collected and identified over 2,700 species of named peonies that had appeared in botanical literature [source: Coit].

These heirloom flowers still grace temperate gardens worldwide. They need full sun and cold winters to stimulate their lush blooms, and they'll probably need staking. You can also cut them, however, and enjoy the flowers inside. Once established, they'll return each summer for decades.

Read about another long-storied flower on the next page.