by Rosalind Jackson
Prev NEXT
3 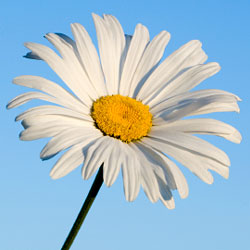 This Shasta daisy looks perfect against the blue sky.
iStockphoto.com/DaydreamsGirl

­The Shasta daisy, Chrysanthemum maximum (Asteraceae), is allegedly named the Shasta daisy because it made Luther Burbank, the man that created this hybrid, think of the white snow on Mount Shasta in California. It is a small perennial flower with white petals and a yellow center. The white petals are all similar in size and tend to be slender in width. The yellow centers can be rounded high­ or quite flat [source: Perennial Plant Association].

Each flower is attached to its own green stem, which may grow to be 1 to 3 feet (30 to 90 cm) tall. Shasta daisies are the taller and bigger relative of the Ox-Eyed daisy. The Shasta's typical blooming period occurs somewhere between June and July. Remember, Shastas do not bloom as long as an annual might, but their foliage will remain green throughout the year. Gardeners recommend that you use the Shasta as a groundcover or the flower along the border of your garden since the green part of the plant will last all four seasons. If you are looking for more uses of the Shasta, you can count on the Shasta to bring in butterflies but keep the deer away.

Once they are settled in a garden, Shastas create thick pockets of daisies. Shastas are wonderful for the South because they like the full sun and warm soil temperatures during their germination period. Germination takes anywhere between 15 and 30 days [source: TAMU].