Top 5 Perennials of the West

by Libby Little
Prev NEXT
4 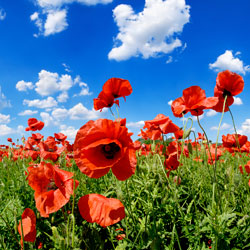 Poppies are self-seeding, so you can expect them to spread throughout your garden.
iStockphoto.com/Trout55

­Californians love their poppies. In fact, each year Lancaster, California, is home to the California Poppy Festival. Poppies can die off after one year in certain climates, classifying them as annuals. But many in the Papaver genius, especially those that grow in the West, are considered perennials.

There are around 50 species of poppies to ch­oose from. Most have gorgeous cupped petals that reach for the skies as they open. Standing on long, hairy stems, most poppies will do just fine with little water. This makes them an excellent option for drought-prone locations. Poppies are self-seeding, so expect them to wander around the garden. These beautiful flowers can produce blooms that stretch up to 7 inches (17.78 cm) across and vary with single, semi-double or double flowers. The blooms come in a variety of colors, such as red, pink, white or purple, or they may be a blend of multiple colors. Some common poppies are:

Poppies have been a standard part of gardens all over the world for thousands of years. T­hey have been found in the ruins of ancient Egypt and are often referenced in folklore. In Greek mythology, Demeter was the goddess of agriculture and fertility. Farmers believed the poppy to be her favorite flower, so they planted poppies around their fields for good luck. This resulted in the aptly named corn poppy, which was planted around cornfields to honor Demeter [source: National Garden Bureau, Inc.]