Top 5 Perennials of the West

by Libby Little
Prev NEXT
3 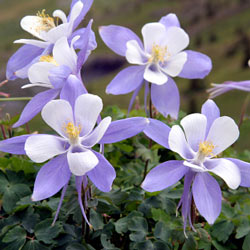 Columbines were thought to resemble a cluster of doves, so they were named for the Latin "columba."
iStockphoto.com/phototerry

­Columbines were thought to resemble a cluster of doves, so they were named for the Latin columba. These fascinating flowers are an eye-catching treat. They have long spurs to store nectar, making them an attractant for hummingbirds, hawk moths and bumblebees. Research shows th­at columbines have developed these unusually long nectar spurs in order to accommodate their pollinators [source: ScienceDaily]. Columbines are immensely popular due to their unique features.

Columbines tend to grow in clumps, so it helps to add smaller groundcover around the plants to keep them from looking awkward. Some varieties of columbines include:

Columbines can grow quite tall, so staking and wind-protection are recommended. They prefer light soil that is well drained and they like plenty of sunshine. You can grow your own columbines from seed or divide the clumps for propagation. As with poppies, columbines will readily self-seed.