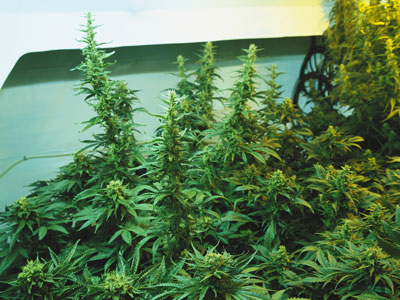 Because aeroponic systems are so easy to use after they're built -- setting the grow lights and sump pump timers allows relatively hands-free growth -- the technology is coming into wider use.

­Small commercial outfits have found the technology useful for cutting costs and boosting profits. A Colorado basil farmer has the time to work his day job as an optometrist while still providing the herb to more than 100 area restaurants [source: Weaver]. Aeroponic systems cut costs like water, fertilizer and soil: Ultimately, all you need is the nutrient solution and the water required to mix it. It also reduces space requirements. Because of all these attributes of aeroponic growing, little guys can compete better with larger growers.

Aeroponics has become a favorite tool among serious growers of another variety of plant -- marijuana. Pot growers have taken to growing indoors in increasing numbers. Many are finding that the technology produces higher yields with less space requirement [source: Escondido]. The lack of water needed to grow aeroponically also makes this method attractive. A single mature marijuana plant can require as much as 15 gallons of water per day [source: Ecology Center]. Unusually high water bills can tip off law enforcement. Pot growers who move their operations inside, especially those who opt for city growing, will find they've got company. Urban gardeners have found that aeroponics suit their needs well. Soil is often scarce in cities, which makes using aeroponics a good growing option in town.

Growing food crops on rooftops and in apartments, to use another example, reveal some obvious advantages. Growing one's own food has become increasingly attractive as food prices have increased, but those same food prices are based around an environmental threat. Let us explain: Each food item has a transportation cost, the amount of money and resources dedicated to moving it from its area of origin to your dinner table. Many involved in the urban gardening movement believe that local food production cuts down on both prices and environmental impact. It takes a lot of carbon dioxide emissions to move a grapefruit from Florida to New York; growing food locally -- especially in a communal aeroponic system in an apartment building -- reduces those impacts dramatically.

Water has also become a point of contention among humans in the 21st century. About 70 percent of the water consumed by humans is used for agriculture, and about 45 percent of that is lost due to shoddy irrigation techniques [source: UNESCO, WAPA]. Aeroponics' use of water, in an enclosed system that recirculates it, drastically cuts down on water consumption by as much as 98 percent [source: NASA].

As more people are born into the world, land becomes scarcer. Arable land is often created by leveling forests and other ecosystems. So are cities, suburbs and exurbs. By combining the increased growth of human activity with food production inside those areas instead of reserving rural areas for food production, humans could drastically reduce their impact on the environment and allow some cropland to return to its natural state. Allowing these areas to naturalize should let forests return, arguably leading to more carbon dioxide scrubbed from the air, which is what helped humanity develop and flourish in the first place.