Water in the Veins -- Irrigation Methods 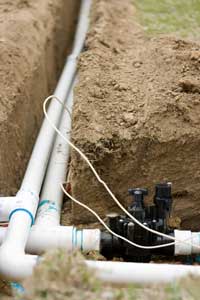 Several methods of irrigation exist, but the varieties of irrigation line involved break down into three categories: surface, subsurface and elevated. Regardless of how much water you're looking to move, how you distribute it or what you're watering on the other end, you can either bury the line under the soil or keep it aboveground. Each method has its own advantage.

On one hand, a subsurface irrigation line doesn't serve as an eyesore or take up surface real estate. However, just because it's out of sight doesn't mean it won't break or require maintenance. With surface irrigation lines, you obviously won't have to grab a shovel to service a break, but the line is right there on the surface and is potentially subject to more damage from mechanical, human and animal blunders. Some irrigation systems employ elevated lines, which also allow sprinklers to cover larger areas. But since these systems require additional supports and higher pressure, they can be the most expensive irrigation choice. Wheel move irrigation systems are a common form of elevated irrigation line, in which the line serves as the axle for a series of large, rolling wheels.

The materials used to make these lines vary, ranging from strong metals to wood and even stone. One popular modern material is polyvinyl chloride or PVC piping, a form of rugged plastic often used in plumbing. Many manufacturers offer grades and sizes of PVC that are especially made for irrigation lines. Polyvinyl chloride isn't impervious to wear and tear, however. PVC pipes deteriorate over time, especially if subjected to high pressures, large volumes or water hammer (the hammering noise you hear when the flow of water is suddenly stopped). Couplings and cement hold together lengths of PVC piping cement.

­Polyethylene tubing, or high density polyethylene (HDPP) pipe, is another popular irrigation line mat­erial. Resembling lengths of black tubing, poly pipe is more flexible than PVC, often making it easier to install. Lengths of poly pipe secure together with clamps and couplings, but they can also be heat fused.

In many cases, a properly functioning irrigation line simply serves as a conduit for the water between the source and the water delivery system, such as a sprinkler. In other cases, water delivery takes place along the length of the irrigation line, either through mounted sprinklers or holes in the tubing itself. The latter method is key to subsurface drip irrigation, in which water seeps out through a length of buried perforated tubing. In this way, the water goes straight to the roots and doesn't have to trickle down through the soil or potentially pool on the surface.

What can go wrong with irrigation lines? Find out on the next page.

Some farmers and gardeners shy away from PVC pipe for another reason: possible pollution. PVC pipes can leach phthalates, a reproductive toxin [source: Greenpeace]. While most of the controversy centers on the use of PVC in kitchen pipes and sandwich bags, some environmentally minded landscapers are already pushing for more HDPP pipe, or even manual bucketing, over the use of PVC.