Browse the article Why landscape with native plants? 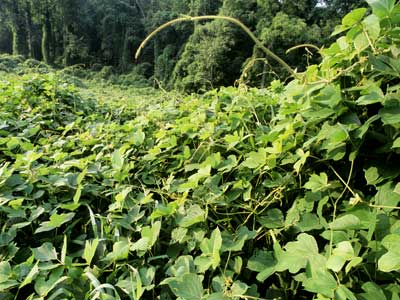 Kudzu, a non-native invasive plant, was introduced to the United States from Asia in the 1800s to provide erosion control.
DKAR Images/Getty Images

­In the Southern United States, leafy green kudzu vines have overtaken portions of the landscape with a vengeance. Given the right mix of moderate heat, sunlight and rainfall, kudzu will trample anything in its path, growing at an astonishing rate of one foot (30 centimeters) per day [source: USDA Forest Service]. When that happens, the kudzu envelops trees, bushes and buildings so thoroughly that it resembles sheets draped over furniture in an abandoned house.

Although kudzu has become a definitive feature of south­ern scenery, it hasn't always been around. The aggressive plant was introduced to the United States from Asia in the 1800s as a form of erosion control [source: USDA]. While its robust root system may help hold soil in place, its vines can extend up to 100 feet (30 meters) and smother any plants in their path. Kudzu has since slithered from the East Coast to the Midwest and is classified as an invasive non-native species.

­The kudzu takeover is a prime example of a bioinvasion, in which a non-native plant enters an area and threatens the livelihood of other plants. Bioinvasion harms ecosystems because it disrupts the balance between the origina­l flora in that space and the fauna that feeds on it and helps it proliferate. Today, for instance, an estimated 37 percent of Pennsylvania's total plant flora is non-native [source: Pennsylvania Department of Conservation and Natural Resources]. How do non-native plants move around in the first place? As in the case of kudzu, people may intentionally introduce a plant for a specific purpose. Then, once established, a plant can spread its seed via wind, insects or animals. Ships are another major vehicle for bioinvasion. Some ships transport remnants of plants in their cargo or in the thousands of gallons of water retained in their ballast tanks [source: Bright].

In an effort to mitigate the effects of bioinvasion and offset global climate change, landscaping with native plants has become more popular in the United States. Native plants generally include indigenous flora found in a geographic location prior to European settlement. But in addition to relieving some ecoanxiety, does native landscaping offer any benefits for the gardener? 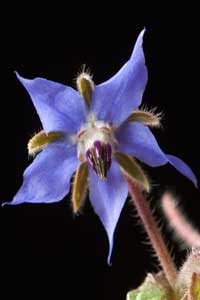 Native plants have deep historical roots in the landscapes where they grow. Plants may be indigenous to individual ecosystems, states or regions, depending on the species and mode of seed or pollen transmission [source: Audubon]. Wild lilacs of California, starflowers of Wisconsin, Georgia's Piedmont azalea and other species have thrived in the same places for thousands of years. Growing in groups called communities, native plants provide habitats for regional insects and animals [source: EPA].

­When considering the benefits of native landscaping, you can think of native plants like tailor-made suits. Since they're specially acclimated to the regional climate and potential predators, native plants don't require much in the way of alterations. That translates to minimal labor for you. Once your native plants are landscaped and flourishing, they require less tender love and care than non-native ones. First, you'll have fewer seasonal plantings since native plants can better withstand temperature changes. You won't have to water them as often because their root systems have evolved to correspond to the land's type of soil and amount of rainfall. In the Midwest, for example, native prairie grasses have deeper, broader root systems to compensate for dry spells. Fertilizers and pestici­des probably won't be necessary either, since native plants evolved to thrive and resist predators.

In addition to being easier on your back, native plants are easier on your wallet in the long run. Water, fertilizer and pesticides, in particular, are significant gardening expenses that native landscaping can drastically reduce. Exotic plants may also cost more than native ones at nurseries.

You're also doing the environment a favor when you landscape with native plants. According to the Environmental Protection Agency (EPA), 5 percent of air pollution in the United States comes from gas-burning lawn and garden equipment. Since native landscape maintenance doesn't involve routine mowing, it virtually eliminates those emissions. The diminished use of pesticides, herbicides, fungicides and other poisons promotes cleaner water quality. Along with filtering storm water more effectively, native plants prevent soil erosion naturally and serve as more effective carbon sinks [source: EPA]. Above all, native landscaping enhances biodiversity and fosters healthy ecosystems by providing nectar, seeds and pollen for neighboring flora and fauna.

If you're interested in native landscaping but aren't sure what fits that criteria in your area, helpful resources abound. Don't start by digging up native plants and replanting them in your yard. That will only disrupt the original plant community. Instead, consult native plant guides on your state's Department of Natural Resources Web site or in online and print field guides. Then, record your soil, water and sunlight conditions and visit a local nursery. Nurseries and some online stores will have native plants and seeds you can grow safely.

Like any gardening project, native landscaping entails preplanning and design to cultivate a harmonious plant community. No matter your location, native plants offer varied and colorful options for creating a garden that eases not only your load, but also the environment's.