What are ornamental grasses?

Uses and Benefits of Ornamental Grasses 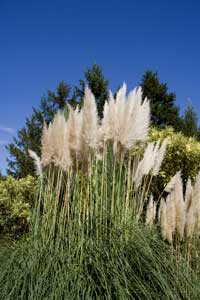 ­The term ornamental implies that these varieties of grasses serve no purpose other than decoration, akin to garden gnomes or sundials. In ­actuality, ornamental grasses have more potential uses than turf grasses. Depending on how you wish to landscape your yard, you can cultivate them as ground covers, borders, screens, accents and container gardens.

In addition to their versatility, ornamental grasses cover a broad palette of colors, textures, blooms and heights. Zebra grass stems are striped with gold and pale green; blooming pink Muhly grasses look like giant puffs of cotton candy; Indian grasses stand tall and sport proud cream plumes. Horticulturists sometimes refer to the songs of ornamental grasses composed by their long strands that rustle in the wind. You can select ornamental grasses specifically for their fragrance, flowers or other factors.

But instead of having the high level of maintenance required for turf grass, you can let ornamental grasses go wild. Put another way, tending to turf grass is like baking a loaf of bread, while maintaining most ornamental grasses is more comparable to making muffins. If you're baking bread, you must pay careful attention to knead it properly and allow it to rise for the correct amount of time before kneading it again. For muffins, on the other hand, you simply mix the batter and bake.

Why are ornamental grasses usually the easier of the two to manage? Ornamental grasses are known for their hardiness. They generally withstand harsh weather, disease and pests well. Once you establish ornamental grasses in the appropriate type of soil, sunlight exposure and rainfall, they need little water or fertilizer to grow. A majority of ornamental grasses you'll find are also perennials, which means they'll come back every year. Aside from an annual pruning to prepare for the spring, you can leave your clippers in the garage.

­As with other plants, ornamental varieties thrive in specific hardiness zones and soil and sunlight conditions. In addition, these plants divide into cool and warm season categories. Cool season grasses grow best when planted in the early spring during wetter conditions, while warm season ones favor hotter, drier climates.

Ornamental grasses are also divided into clumpers or runners, which determines how the plants will spread out and affect the final appearance of your garden. Clumpers, such as towering pampas grass, have root-ball structures that cause the grasses to grow outward from the center. Because these grasses remain compacted in one clump, they're easier to control and work well as accents among other plants. Runners have growth patterns similar to turf grasses. These ornamental grasses proliferate via rhizomes, or underground stems, that give way to new sprouts. The complex root systems make runner grasses more aggressive than clumpers and more suitable for ground coverings.

Given their diversity and ease of care, ornamental grasses have gained much popularity with landscapers and gardeners in the past decade. If you're looking for an ornamental grass to fit your fancy, visit the links below for helpful resources and tips.

When gardening with ornamental grasses, beware that some can grow like gangbusters. Certain species, including Moundry fountain grass and Ribbon grass, can become invasive plants in certain climates. When that happens, they overtake parts of your yard and choke out other plant life. To learn about invasive ornamental grasses in your area, check out your state college's or university's agricultural extension Web site.­ ­