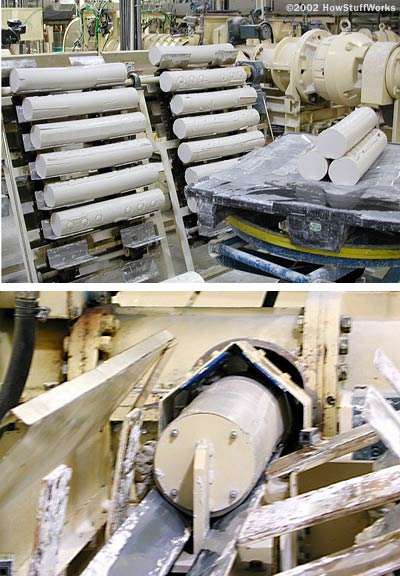 The forming operation, or pug molding, starts at the jiggering unit. Like most of the machinery here, there are two jiggering units: one for white china (gray pugs) and one for ivory china (green pugs).

The pugs are pushed through another extruder to remove any remaining/excess air. A giant slicer divides each pug into several clay discs.

Each disc of clay is then placed on top of a plate mold. The plate mold begins to rotate. A jigger head hovering above starts to rotate, too, and presses down upon the rotating pug slice and mold plate. A scraping tool cuts off excess clay from the rim of the newly formed greenware plate.

Pug slices are placed on production molds.
A plate is formed: Note the excess clay traveling down the conveyor belt to the yellow recycling bucket.

The excess clay shoots down a conveyor belt to a recycle bin. This reclaimed clay will be blended with water to create a slurry that will eventually go into a batch of final mix.

Workers inspect each plate as it leaves the finishing machine. The plates are placed on setters. Setters are actually very similar to the plaster molds, except they're made of material that can withstand the extreme temperatures of the kiln. The setters, now carrying the newly made plates, are stacked on metal racks to be passed through the kiln. The setters play an important role. At this point, the plates are still fairly malleable (they can bend). The setters ensure that the plates maintain their form in the kiln.

A Lenox employee places a plate on a setter.

There are separate machines for molding cups, mugs and small bowls. The cups move through a jiggering unit similar in concept to the plate unit. As mentioned earlier, the pugs used for cups are at a 15-percent moisture level. Once the basic cup form is made in the jiggering unit, it is put through the profiling unit. A carbide blade forms the side and foot profile of each cup.

Handles are affixed, by hand, to each freshly profiled cup. These cups are then passed to a finishing area. Using small finishing knives, water and sponges, workers smooth out the lip and foot of each cup and make sure the handles are securely attached. The finished cups are placed on small setters, called chums, and stacked on racks destined for the kiln.

Now, let's take a look at the casting process: forming china from molds and slip.

In stations like this, there are several jobs to be done. All station employees are cross-trained on the various aspects of work done in that particular unit. This benefits both the company and the employees.

For the company, cross-training helps ensure continued productivity, even in the absence of employees due to vacation or sick time. For the employees, cross-training can help lessen physical strain. Some jobs require close work that can cause eye strain, while other jobs require long periods of standing -- so switching tasks mid-shift makes a lot of sense.