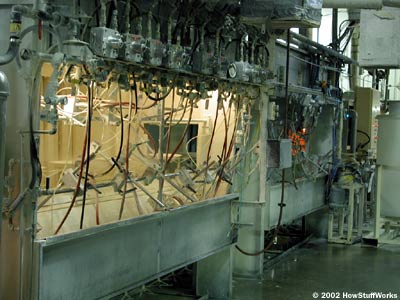 Notice the glowing orange area to the right -- this is where the dishes are pre-heated prior to glaze application.

Each piece of china must be pre-heated so the glaze will adhere to its surface. The glaze is pumped from giant holding tanks to the glazing area.

Bearing a slight resemblance to an automated car wash, the glazing booth contains something like a dozen spray guns. For the dinner plates that are being glazed, eight of these spray guns are in use so that every part of the plates will be covered. The plates, resting atop metal stands, are pushed through the continuous stream of glaze. A wall of flowing water (it looks like a series of waterfalls) faces the row of spray guns.

This series of waterfalls serves an interesting and thrifty purpose. The water catches the mist of glaze that doesn't fuse to the clay. The great thing about this is that it turns out the glaze is heavier than the water. So, after the water from the glazing booth is left to sit for a while, the glaze can be reclaimed and recycled for future use.

Prior to being placed in the gloss kiln, which is 185 feet (56 m) long, the foot (bottom) of each piece of china must be wiped clean with a damp sponge so it won't stick to the kiln.

This kiln runs for eight and a half hours at 2,020 degrees F (1,104 C). Unlike the first kiln, which is all gas, this one uses both gas and electricity.

For most kilns, there's a warm-up stage, a hot-zone or soak stage, and a cool-down stage. In the gloss kiln, the stages go basically like this:

During soak, there's a lot of turbulence in a gas kiln. Because an even finish is needed for the glaze, the soak stage of the gloss kiln is powered by electricity.

After the gloss kiln, the whiteware is inspected again. Any sharp or uneven edges on the foot of the whiteware are ground on a diamond wheel.

Grinding the foot of a plate

The whiteware is now ready for decals and decoration -- until then, it's kept in a holding/storage area.

The Lenox plant in Kinston, NC, spends 1.5 million dollars on gas and electricity each year.