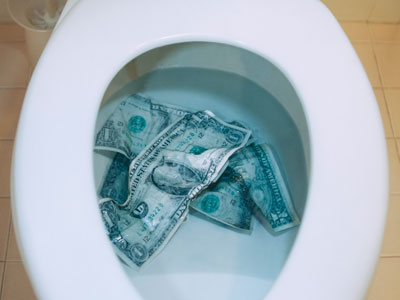 The toilet isn't just an appliance. It's a privilege. After all, we'd be living in a diseased and disgusting world without these shiny white bowls to accept our bodily waste. Unfortunately, these appliances use a lot of water to do their dirty work. And when drought plagues, we worry that the toilet is flushing away too much of a valuable commodity.

Most people don't realize how much of our water toilets hog. After outdoor irrigation, toilets consume the most water in a residential home. Flushing a toilet accounts for 14 percent of the water used both inside and outside a home [source: Alliance for Water Efficiency]. And if you measure only indoor appliances, the percentage of water used by toilets goes even higher. Flushing a toilet uses 38 percent, or more than a third of the water, utilized indoors in the typical U.S. home [source: Massachusetts Water Resources Authority].

Enter the low-flow or low-flush toilet. Since 1992, U.S. law has mandated that new toilets sold in the United States be low-flow or low-flush, which means that they consume no more than 1.6 gallons (6 liters) per flush. Before that time, typical toilets sold in the United States used 3.5 to 7 gallons (13.24 to 26.5 liters) per flush.

Many people who live in older homes don't have low-flow toilets. But more and more government and nonprofit agencies are urging homeowners to replace those toilets with low-flow models. Many cities and municipal water organizations even offer rebates for purchasing a low-flow toilet.

There are various types of low-flow toilets available, but most use either a gravity or pressure-assisted technology to work. They have varying designs ranging from basic to luxurious. For example, one top-of-the-line low-flow toilet, made by Toto, comes with an optional sound module that can be used to mask bodily noises with everything from the sound of a toilet flushing to the sounds of a running brook or crashing ocean waves.

Sound effects may be a bit over-the-top, but saving water is always a good idea. How do these low-flow toilets get the job done?

In the early 1990s, many homeowners complained that their new low-flow toilets just didn't function effectively. At that time, to comply with the new Federal law mandating a 1.6-gallon (6-liter) maximum flush, most manufacturers merely reduced the size of the tank of their toilets to achieve that required water reduction. Unfortunately, however, many of those manufacturers hadn't figured out how to clear waste efficiently from a low-flow toilet, plumber Terry Love told HowStuffWorks. Back then, homeowners were often double flushing to get their toilets to perform, which didn't translate into water or financial savings.

The flapper, the device inside the tank that opens when you push the flush handle to allow water to run into the bowl, also often leaked on those early low-flow toilets. These flappers were also difficult to replace because consumers often weren't given the right information on how to obtain the correct replacement product. Plus, the chlorine-based bowl cleaning tablets popular at that time could destroy components inside the tank, including the flapper, which caused leaks. This was a serious problem that affected not only low-flow toilets, but older models as well.

Are today's low-flow toilets still riddled with such problems? 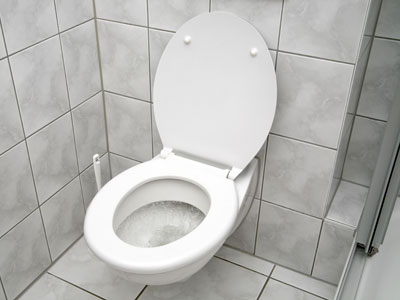 Today's low flow toilets are much more effective and efficient, and their parts are more durable and replaceable. Using the chlorine tablets no longer destroys flappers and creates leaks. And if that does happen, finding the proper replacement flapper is much easier for the consumer. Furthermore, manufacturers have redesigned the hydraulics of tanks and bowls, improving water flow. Toilet manufacturers, in fact, now use sophisticated computer models to design the hydrodynamics of their toilets.

Low-flow toilets, also sometimes called ultra low-flow toilets (ULFTs), usually use one of two methods to clear waste: gravity or pressure-assisted. However, they all use 1.6 gallons (6 liters) of water or less per flush. Gravity toilets clear waste when you move the flapper and water is released, dropping from the tank and flushing through the bowl. Gravity drives the waste out of the bowl. Pressure-assisted toilets, by contrast, compress a pocket of air, which acts to energize the water that's released into the bowl with each flush. The air is compressed within a vessel inside the tank each time it refills. Pressure-assisted toilets are a little noisier than gravity-fed models and they usually are more expensive as well, starting at more than $150 versus $75 or more for gravity-fed models.

Since 1999, some toilets have been made available that use even less water per flush than the typical low-flow toilets. These are called high efficiency toilets (HETs) and utilize about 20 percent less water than the average low-flow toilets, or about 1.28 gallons (4.8 liters) per flush.

One type of high efficiency toilet is the dual flush. Push one button and solid waste disappears, and there's another for liquids. Solid waste is cleared with 1.6 gallons (6 liters) of water per flush, while urine is flushed away with only 0.8 gallons (3 liters).

How to Choose a Low-flow Toilet

Customer satisfaction surveys show that today's low-flow and high efficiency toilets perform far better than the water-wasters (3.5 gallons and more) they've replaced. But there are differences among toilets, and the following factors influence how well a new toilet performs.

What should you look for when buying a low-flow toilet to get the most out of your investment?

Since 1978, manufacturers, magazines like Consumer Reports, and other organizations have been testing toilets. A new testing protocol, called Maximum Performance (MaP) testing, supported by water utilities, toilet manufacturers and government agencies, began in 2003 and judges how well a toilet clears soybean paste with a single flush.

Low-flow Toilets Around the World

The United States is not the only country that has discovered the advantages of low-flow toilets. Australia mandates that all new toilets sold be dual flush. Sweden has restricted new toilets to low-flow (1.6 gallons/6 liters per flush) for many years. However, Canada still allows older style toilets (using 3.5 gallons/13.2 liters of water or more per flush) to be sold. But Ontario requires that all new construction have low-flow toilets.

In the United States, city and state governments are moving to even tougher legislation on toilets. In California, a bill signed into law in 2007 requires that all toilets sold and installed in California after Jan. 1, 2014, be high efficiency toilets. Other states like Georgia and Texas and cities like New York have considered similar requirements. In DeKalb Country, Ga., near Atlanta, legislation requires low-flow toilets in all older homes sold on the real estate market. And many consumer advocates say that even more restrictions on toilets will eventually be written into federal law, requiring that all new toilets be high efficiency models.

To make it easier to buy a low-flow toilet, many utilities and cities are offering significant rebates and vouchers to those who buy them. The Metropolitan Water District of Southern California, for instance, offers rebates valued at up to $165 for those who buy a high efficiency toilet. In Pasadena, Calif., Pasadena Water and Power offers a $265 rebate to owners of commercial and multi-family dwellings who purchase dual flush high efficiency toilets. DeKalb County in Georgia pays $50 to $100 per toilet to homeowners who buy low-flow toilets, up to three toilets per home.

Retrofitting Older Toilets to Save Water

If you'd like to save water, but don't want to invest in a low-flow toilet, there are a few ways to retrofit a toilet so that it uses less water.

The most common approach is to use a household displacement device. These devices are placed inside the tank in a place where they won't affect flushing and do just what you'd think -- displace water. Because they take up room inside the tank, the tank doesn't have to fill up with as much water each time you flush. Some typical displacement devices include plastic bottles (for example milk bottles) or bags filled with water, or bricks.

Displacement devices can reduce the amount of water a toilet uses by about 4.2 gallons (15.8 liters) per toilet per day, reducing water usage by about 13 percent, according to the Sustainability of Semi-arid Hydrology and Riparian Areas (SAHRA) research institute.

But there are cautions for using displacement devices, and they're not recommended as a long-term solution. Bricks can deteriorate and cause damage to the flushing mechanism, unless they're wrapped in plastic wrap or a small garbage bag. Plastic bottles or bags usually need to be weighted (with pebbles, for example) to make sure they're stable.

Another way to retrofit a toilet is to use a displacement dam. These are plastic dams that are wedged into the tank on both sides of the flush valve. They decrease the amount of water per flush by holding back a small amount of water. The water held back by the dams is not used, thus decreasing the amount of water used per flush. Displacement dams save about 6 gallons of water per toilet per day, according to SAHRA. One advantage they have over homemade displacement devices is that they're less likely to move around in the tank and disrupt the flushing mechanism.

Yet toilet dams and other displacement devices deteriorate over time and should not be employed as a long-term solution, according to Koeller. They definitely affect the flush performance of a toilet, which can lead to more frequent double flushing. When this happens, the expected water savings may never materialize.

Still, all retrofit devices generally affect how well a toilet functions, and retrofitted toilets simply don't work as well as new low-flow and high efficiency toilets in clearing waste, according to Koeller. And since low-flow toilets with excellent performance are available for less than $100, it's hard to find reasons to choose retrofitting instead, he adds.

To learn more about low-flow toilets and other kinds of toilets, check out the links on the next page.