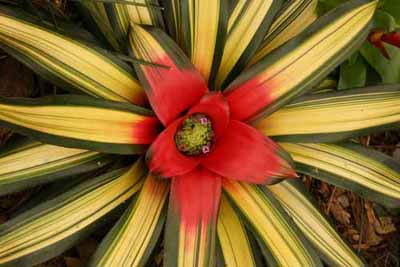 The Neoregelia genus of bromeliad were named in honor of Eduard A. von Regel, the 19th century superintendent of the Botanical Garden in St. Petersburg, Russia.

Many of the plants included in this genus were originally in a genus called Regelia. The nomenclature became so confused that in the early thirties, Dr. Lyman B. Smith decided to reorganize the names. He named the new genus Neoregelia by adding the Greek "neo; new" to distinguish it from the old genus.

Neoregelia contains about fifty species and a large number of varieties. Most are from eastern Brazil. Although most neoregelias are terrestrial, some are found on shaded, lower branches of trees. They have been favorites in European collections for over one hundred years.

Neoregelia ampullacea, a small plant, has leathery, green leaves marked with wide dark bands. The blue and white flowers are hidden deep in the vase. They are good hanging plants.

Neoregelia carolinae, sometimes called Nidularium meyendorffii, has foot long leaves that form a flattened rosette. When the plant is about to bloom, the center of the rosette becomes a bright red and provides a contrast for the lavender flowers that appear deep in the rosette.

Neoregelias are easy to grow both indoors and out. Give them warm temperatures, filtered to shady light, and even moisture with excellent drainage.

Has reading about bromeliads encouraged you to start flexing your green thumb? To learn more about gardening, see: