Brick of a Different Color 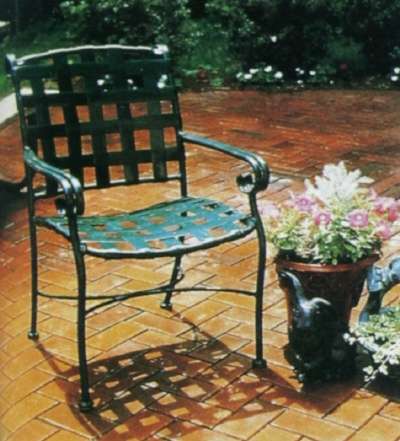 Laid in a neat herringbone pattern, this patio floor carries the orange color of new bricks.

Suited to a host of house styles and patio configurations, brick has long been high on the list of favorite patio materials. And though the familiar image of this versatile paver brings to mind the color family of reds and yellows, brick is available in a wide range of dark, earthy tones, including black. These darker shades are usually formed during the firing process; the finished color is influenced by the type of clay and the amount of iron within the clay. Brick that's been streaked, or flashed, with dark lines also makes for an interesting patio surface.

A dark brick floor can give a patio an older, more traditional appearance and set up dramatic contrasts with lighter-colored elements such as furnishings and garden accents. It can also recede into the background, allowing foliage and flowers to take center stage.

The dressy effect of white on black brings formality outdoors to this enclosed patio.