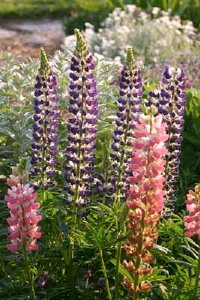 Some authorities think that scientific name for lupine, Lupinus, comes from the Latin word for "wolf," as it was an ancient belief that lupines destroyed the fertility of the soil. Others, however, think the name is from the Greek lype for "bitter," because the seeds have a bitter taste and were considered a food of the downtrodden.

Growing perennial lupine: Lupines require a lot of water and a spot in full sun or in the lightest of shade. Plants resent areas with hot summers. Soil must be well-drained with additional grit or sand. Lupines do not adapt to alkaline soil. Remove the dead flowers to prevent seed formation and to conserve the plant's strength. Cutting back to the ground after flowering will often produce a second crop of blossoms.

Propagating perennial lupine: By seed or division in early spring.

Uses for perennial lupine: Lupines should be planted in large groups where their flowers make a spectacular sight. The plants are especially suited to seaside gardens.

Perennial lupine related varieties: The Russell strain of lupines is the variety that is usually offered by nurseries. It can be purchased in mixed colors that include blue, pink, red, purple, maroon, white, and mixed colors. Some nurseries offer individual colors. Gallery and Minarette are two series that include a range of named color forms with compact growth.