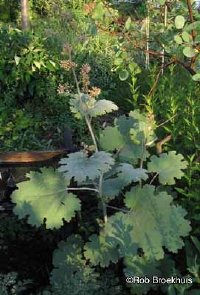 The plume poppy is a plant that every border should have. Even when not in bloom, it is lovely. Older books call it Bocconia. The genus is named in honor of Alexander Macleay, a Colonial Secretary for New South Wales.

Description of plume poppy: Large, lobed leaves, gray-green on top and white and downy underneath, are often 8 inches across on stems to 8 feet tall, Small, white flowers have up to 30 stamens that wave in the wind and bloom in late summer. Plume poppy ease of care: Easy.

How to grow plume poppy: Plume poppies do well in average garden soil in full sun and partial shade in areas with very warm summers. If soil is fertile and dug deeply, plants will quickly spread. The stems are very strong and plants do not need staking.

Propagating plume poppy: By division or by cuttings.

Uses for plume poppy: Unlike many plants in their height range, plume poppies look great from the ground up and should not be set behind other plants. They are great as specimen plants and also do well in pots.