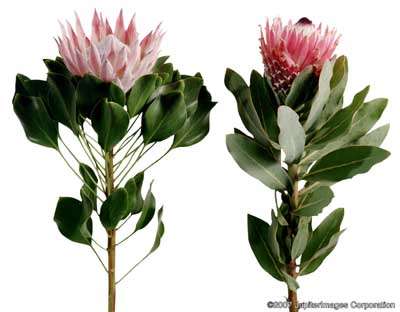 The genus Protea, which gives this family of Southern Hemisphere plants its name, is the national flower of South Africa.

Because of the diversity of the plants, the genus was named after the sea god Proteus who was always changing his shape. Protea flowers are massed at the ends of the stems and their leaves have smooth edges.

Another genus, Banksia, has deeply toothed leaves. Banksia, mostly from Australia, were named after Sir Joseph Banks who is often called the Father of Australia. In this country both banksia and protea are called protea although some protea is called pink mink, and in Australia banksia is often called honeysuckle tree.

Available mostly during winter and spring, protea and banksia will last for a couple of weeks fresh and for years as dried material.

To condition, remove the lower foliage, cut or break off the bottom of the stem, and place in warm water. If you want to dry them, remove from water before they start to rot.

Want to use protea in your cut floral arrangements? Learn how: