by Matt Cunningham
Prev NEXT
7 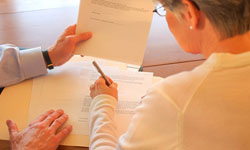 Don't sign over a portion of your ownership to a company claiming they can stop the foreclosure process -- it could be a scam.
Jupiterimages/Comstock/Thinkstock

One of the most insidious types of foreclosure fraud is the fractional interest transfer. According to the Department of Justice (DOJ), this fraudulent practice is slightly more common in West Coast states and can have far-reaching effects on both homeowners and lenders.

The details of fractional interest transfers may vary from scam to scam, but they all involve the homeowner signing over a portion of his or her ownership stake to a company that claims it can stop the foreclosure process. Through a series of moves, such as hiring "straw owners" to take part of the ownership and then file bankruptcy, the scammer is able to delay the foreclosure process. This service often comes at a price, as the homeowner not only gives up a portion of the ownership, but also may pay a monthly fee [source: Limprecht].

In the end, though, these companies rarely, if ever, stop the foreclosure process. Their bankruptcy filings simply stall the process and can sometimes send an unwary homeowner into bankruptcy. DOJ investigations have found that, in many cases, the companies perpetuating these schemes never intend to rescue their clients from foreclosure -- they simply use a series of semi-legal maneuvers to milk as much money out of their victims as they can before the foreclosure is complete [source: Limprecht].