by Matt Cunningham
Prev NEXT
5 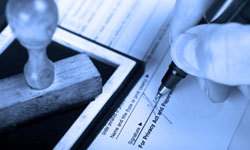 Document forgery is common in foreclosure fraud cases, and it can take several different forms.
Hemera/Thinkstock

Many of the foreclosure frauds mentioned so far include some form of document forgery. But a more widespread -- and more infamous -- problem came not from outright fraud but from lenders trying to keep up with the boom in foreclosures that followed the housing bust.

The claims of improper processing generally followed similar lines from state to state: Investigators alleged that banks, in order to process thousands of pieces of paperwork a month on the growing wave of mortgages, directed their staff to "rubber stamp" signatures on paperwork. In some cases, investigators reported finding the same official's name signed in several different hands on different documents [source: International Business Times].

These timesaving moves by banks go against the letter of most states' foreclosure laws, which have steps in place to ensure lenders fully review a mortgage before starting a foreclosure. The implications are hard to predict; although these processes are still under scrutiny, as of early 2011, the banks have been allowed to resume some foreclosures.