by Matt Cunningham
Prev NEXT
3 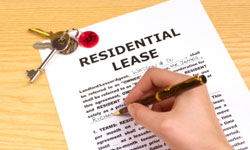 The most unfortunate result of Ola's case was that innocent renters were forced to look for new homes.
Peter Dazeley/Photographer's Choice/Getty Images

This 2011 case from Florida may be one of the more creative -- and destructive -- frauds that's been perpetrated in the wake of the housing bust. Authorities say Pasco County resident George Ola created a series of forged quitclaim deeds (deeds that release ownership of a home to another party) that he used to take possession of several foreclosed homes that had no residents in them. Ola then rented out the homes, posing as a real estate investor with multiple homes that he needed to rent out [source: Linton-Smith].

Real estate property managers notified authorities after Ola repeatedly failed to pay them for work on the houses. That led to the investigation, which revealed the deed fraud. While Ola faces jail time if convicted, a number of his "tenants" face an equally unsettling prospect: They must find new places to live since they had no legal right to be in the homes they rented in the first place [source: Linton-Smith].

Foreclosure fraud like the Ola case is especially ugly because it affects several innocent parties, such as property managers and tenants. But with record numbers of homes sitting empty due to the housing crisis, authorities have to use extra vigilance to catch creative scammers who work to take advantage of the situation.