by Matt Sailor
Prev NEXT
6

Be Ready to Make Repairs 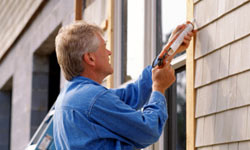 Distressed homes are sold "as is" and almost always need repairs.
Comstock/Thinkstock

Foreclosed homeowners are often forced out of their homes, so they've been known to leave them with intentional damage. During the low point of the housing crisis that struck the United States in the late 2000s, some homeowners who were foreclosed on stole appliances and water and lighting fixtures, both out of anger and in an attempt to make some money out of their circumstances [source: Fulmer]. Of course, once a house is empty, it can become a target for squatters and vandals who can also do damage and leave it filthy. And empty foreclosures are susceptible to theft; appliances, fixtures, and even copper wiring and pipes can be lucrative to thieves who have been known to tear up the walls to gain access to the copper to sell it for scrap [source: McQueen].

All that damage can sound frightening, but if you're not afraid to sweat -- or if you hire someone to do the sweating for you -- you can save money on the more damaged, "fixer-upper" houses. Because you will usually end up making at least some repairs to a distressed home, it's a good idea to have a contractor take a look at the house before you buy [source: Gibbs]. That's in addition to the home inspection. The contractor should make estimates on what the repairs will cost, so you can take that cost into account when making your offer.