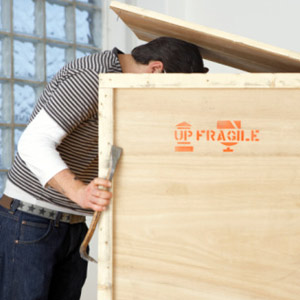 Certain items, such as pianos and TVs, are especially difficult to move.
Stefanie White/Photodisc/Getty Images

Moving hurts. Bending down to pick up boxes, lugging mattresses and carrying recliners and loveseats is backbreaking work. By the end of a long day of moving your things, your muscles will ache. You've had a workout and you're ready for an ice cold beverage and a cushy spot on the couch.

But beyond the cardboard boxes of books and plates, and the various weighty furniture pieces, are certain items that are especially difficult to move -- almost impossible. They're so challenging that they require preparation, tender loving care and maybe even the help of a specialized moving professional. Which belongings are the most difficult to move from one abode to another? Find out on the next five pages.

If you have an aquarium full of fish, then you have a moving challenge. Fish often don't survive the sloshing around and temperature changes involved in a move. Many Web sites simply advise you to sell or give away your fish and the aquarium to someone who lives close by. That way, the fish don't have to endure a long car ride. But if you decide to move the aquarium and the fish, here are some tips: Put your fish into a holding container. Drain most of the tank but keep some of the water - you want to have the same bacteria colony when you reassemble and fill the tank at your new home. If you have aquarium plants, pour some of the aquarium water into a bag and store the plants in there. Store the filter in a chemical-free container. It's best to move your aquarium and fish in your vehicle, rather than have the movers put them into the moving truck.

They don't seem finicky, but they are. A move can be traumatic for a plant. So you need to handle the situation very carefully. If your plants are in ceramic planters, it's best to move them to plastic planters a few weeks before the move. Plastic planters are much lighter, and you can pack up your ceramic planters to be sure they don't get damaged during the move. You'll want the plant to get used to the plastic container well before it's moved. Plants also need to remain in a temperature-controlled environment. So putting them in the back of a moving truck for days on end in 100-degree-Fahrenheit (37.7-degrees-Celsius) heat is not a good idea. Put the plant in the car with you where the temperature is just right.

If you own a 1,200-pound (544-kilogram) grand piano, you're in trouble. These instruments are oddly shaped, extremely heavy and very difficult to get into a new home. Many people simply hire a piano moving service to do the dirty work for them -- and that may be the best idea, especially if your new home is going to present a challenge. For example, piano movers have been known to use a crane to hoist the piano through a window. Otherwise, the job usually requires a special piano dolly. If you're moving to a building with a freight elevator, you're in luck.

Moving art can be a stressful task. For one thing, it's special. It can be expensive and it usually has some sentimental value. For another, it often includes glass, and nobody wants nicks in their frames. The best thing to do is to wrap each frame in bubble wrap or newspaper and then tape cardboard box pieces to each side to protect it. A group of wrapped frames can then be put into one box together for easy carrying.

If you're packing sculptures, you'll need a box one-third larger than your piece of art. Wrap the sculpture in bubble wrap and/or newspaper. Be sure the box is packed tight with stuffing. That should protect the sculpture.

The problem with TVs is that they can be quite large and heavy, and the monitors can be easily damaged. It's difficult to know whether to wrap a TV in a blanket and simply carry it as is, or put it inside a box and pack it. Both methods are acceptable. If you decide to wrap it in a blanket, do it like so: Unplug the TV from the wall and detach any cables. Spread the blanket on the floor in front of the TV, and place the TV on top of the blanket. Then wrap the blanket up and around the TV and tape it in place.

Or, you can put the TV back into the box it came in. If you decide to put it back into the box, then be sure it's packed tightly so that it doesn't shift around when it's moved. If you're moving a plasma TV, never put the screen face down on the floor or the ground because this can hurt the unit.