5 Things You Should Do One Week Before You Move 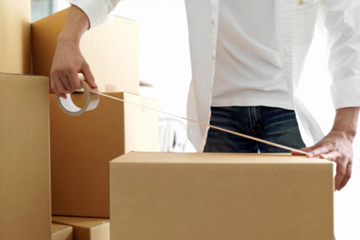 Find out the last steps to take before moving.
Michael Hitoshi/Digital Vision/Getty Images

If you've done things right, then the week before your moving day, your residence looks like total anarchy. Boxes are piled to the ceiling, drawers full of stuff are taped over and separated from chests, and table and chair edges are wrapped in bubble wrap for protection. Your place is barely livable. You've been working for two months to pack up everything your family owns, and it shows.

But no matter how much preparation you do during the two months before your moving day, there are still certain tasks that just have to be left for the last week. What are they? Click through the next five pages to find out what's on the list.

If you bank with a regional bank and you're moving to a new locale, then you'll need to set up an account with a new bank. And that's especially true if you're moving to a new country. It's best to set up a new bank account before you close out the account with your old bank. If you set up a new bank account before you arrive in your new town, you won't pay fees to use ATM machines that belong to companies you don't bank with - so you'll save money. Before you move, check the area to see which bank's ATMs will be most convenient for you. That should help you choose the right one.

If you're moving to a new area and you use prescription medication, then you need to set up that prescription at a drug store in your new locale. This will involve calling your doctors to have them send all of your prescriptions to a new place, so it's a good idea to get this one out of the way early in the week, rather than later. But it's a very important item on your to-do list. You definitely don't want to have to bother with calling your doctor and setting up those prescriptions when you've arrived at your new town and you're desperate for your medication.

Tag Furniture for Proper Placement in the New Home

It's one thing for movers to pick up your million-pound armoire and carry it into the house. But it's a much better thing if they pick up your million-pound armoire and carry it to the correct room. That way, you don't have to do much lifting after the movers are gone. So, make some decisions about where each piece of furniture should live and tag each piece with the name of the room. You might even want to make a floor plan of the new house for the movers, so they'll have an idea of what goes where before they get to the house. That way, when the movers enter your home, they know exactly where to go and where to put the heavy stuff.

The words "survival kit" may sound a little extreme for a moving scenario. After all, unless you're moving to a remote place in the desert, it's unlikely that you and your family will have to go without food and water if you beat the moving truck to your new residence. Nevertheless, there are some things you'll want to have on your person or in your car in case the moving truck is late. For example, pack any important medications, paperwork, changes of clothes that you'll need, and any special foods you know you'll want (even if it's just your coffee maker and some coffee beans). You should also include a first-aid kit. And it wouldn't hurt to pack some tools for work you can do around your new abode before the moving truck arrives.

One of the last things you'll use the night before your move is your bed. So, stripping the beds and packing up the sheets and comforter is one task that will definitely be left to the last day. You'll also need to prepare your home for the fact that it isn't going to be used until a new owner arrives. That means you need to defrost the refrigerator and unplug any appliances. Defrost the refrigerator 24 to 48 hours before you leave. If it has an icemaker, make sure to empty the ice bin and then you may need to shut off the water line to the refrigerator. Any other appliances should also be unplugged.