Browse the article What's the No. 1 reason for foreclosure? 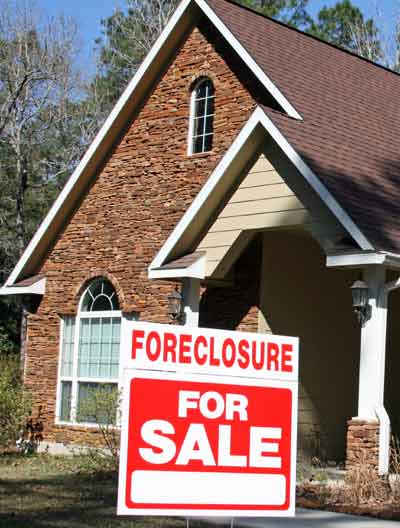 If owning a home is part of the American Dream, then losing a home is fast becoming the new American Nightmare. Foreclosure is the process by which lenders have the legal right to recover their loan by repossessing the property that the loan was for and reselling it to recoup their loss. The process begins when borrowers miss their loan or mortgage payment.

The number of foreclosures has reached a record high in the United States; the Mortgage Bankers Association (MBA) reported in 2008 that more than 900,000 households are in foreclosure. That's up 71 percent from last year, and the figure represents more than 2 percent of all mortgages. That's the highest foreclosure rate in the 36 years that the MBA has been tracking delinquent mortgages [source: Christie].

These numbers might make you nervous about keeping your own home, or perhaps you're too scared to buy at all in this kind of market. Maybe you think you're invincible, and that the foreclosure crisis was caused by people living beyond their means in homes they can't afford. Whichever camp you fall into, you're probably wondering why all these people can't pay their mortgages.

When the foreclosure rate started rising, we heard a lot of blame attributed to subprime mortgages. Subprime mortgages often come with low introductory interest rates that reset at incredibly high values a few years later. Further complicating the matter, people with low credit scores are the main recipients of subprime mortgages, which means they may not have the funds to make a higher payment when the rates adjust.

The number one reason for foreclosure differs by state and region, but we can take a look at some of the current economic theories for the distressed housing market. Next we'll see what role subprime mortgages play.

Some evidence indicates that falling home prices are a big factor in foreclosure.
© iStockphoto.com/Pete Stopher

In Massachusetts, homeownerships made possible by subprime mortgages ended up in foreclosure almost 20 percent of the time, more than six times as often as loans made with prime mortgage rates [source: Gerardi, Shapiro, Willen]. It might seem then, that eliminating subprime lending might go a long way to stemming the tide of foreclosures.

This is the federal government's current approach. In March 2008, U.S. Secretary of the Treasury Henry Paulson unveiled a financial reform plan that would change bank regulation to provide stronger limits on subprime mortgages. The plan calls for a federal oversight committee to monitor mortgage origination; it's an attempt to prevent people from getting stuck in loans they can't afford in the first place.

Yet a 2007 study released by the Federal Reserve Bank of Boston indicates that home values might be a bigger factor than how the home was purchased. For one, the study noted that many people who defaulted on a subprime mortgage initially financed their mortgage with a prime mortgage. The study then turned to home values, finding that homeowners who suffered a loss in home value of 20 percent or greater were about 14 times more likely to go into foreclosure than those who had a 20 percent increase in the value of their home. The Boston Reserve, then, attributed the dramatic rise in Massachusetts foreclosures in 2006 and 2007 to a decline in home prices that began in 2005 [source: Gerardi, Shapiro, Willen].

The study suggests that while subprime lending played a role in foreclosure, the driving factor was not an outrageous reset payment. It was losing equity in the home, so that the value of the home was less than the amount owed on it. A person in a subprime mortgage is likely cash-poor to begin with; the home may be the only real asset to that person's name. With a low house value, that person has nothing to bargain with or refinance. Subprime lending may not have placed people in bad mortgages so much as it created homeowners who couldn't afford for the value of their home to drop.

But what came first? Foreclosures or dropping home values? The Office of Federal Housing Enterprise Oversight (OFHEO) says it's a two-way street. A 2007 study released by this office also found a high correlation between falling house prices and rising foreclosure rates. Homeowners are more likely to default on their mortgage when the value of the property is less than the loan balance, suggesting that lower prices drive foreclosures. But foreclosures can also lead to lower values because there's an oversupply of houses on the market [source: OFHEO].

While California has the country's largest rate of subprime mortgages, it is also suffering from an oversupply of houses due to a popped housing bubble. Investors moved in during a housing boom and built houses while home values were at a high. Now, home values are dropping, and those once optimistic investors can't sell properties or make their reset payment from the adjustable mortgage. They have to walk away. But will the federal government's plans help people in this situation?

It's hard to say. Tightening up subprime lending standards might cause a vicious cycle of falling house prices and foreclosures. If fewer people are approved, fewer homes will be sold and home values drop further. Those applicants trying to refinance a subprime loan may not be able to qualify under the tightened standards, and they're left with a loan they can't afford and possible foreclosure. Prices continue to fall as more foreclosed homes land on the market [source: Christie].

Some places that have high rates of foreclosures may not even have many subprime mortgages. Read on to find out how economic factors can lead to foreclosure.

Economic and Personal Factors in Foreclosure

Midwestern states such as Ohio and Michigan, hard hit by the foreclosure crisis, don't have a relatively high number of subprime mortgages. What they do have is a large number of lost jobs. More than 340,000 jobs in Michigan and 200,000 jobs in Ohio have been cut since 2001 [source: Associated Press]. So economic performance of an area ranks as one of the driving forces of foreclosure, alongside declining home values and subprime mortgages.

Countrywide Financial, the largest mortgage company in the country, also cites economic performance as a cause of foreclosures. In 2007, Countrywide released its findings on the main reasons for foreclosure, which was reported in about 80 percent of the cases. Countrywide attributed "curtailment of income" as the primary factor 58 percent of the time. This far exceeds some of the other reasons:

Surprisingly, payment adjustment on a mortgage was given as a reason only 1.4 percent of the time [source: Countrywide Financial]. We might expect this rate to be higher if subprime mortgages with adjustable rates were the number one reason for foreclosure. Countrywide's data went through July of 2007, so it's possible that the worst of the subprime rate resets were yet to come [source: Christie]. We also might take these results with a grain of salt, as Countrywide Financial is currently under federal investigation for accuracy in its loan documents [source: Simpson].

Still, personal problems, like the ones that follow, will always be one of the traditional reasons for foreclosure, regardless of subprime mortgages and housing values.

As you can see, there's unfortunately no magic bullet that can predict foreclosure; these reasons are intertwined in complicated ways. Before you know it, you might be grappling with more than one factor. For example, being stuck with both a subprime mortgage and hefty medical bills may lead you with nowhere to turn, especially as the value in your home continues to drop.

To learn more about foreclosure and how to avoid it, see How Foreclosures Work and the links on the next page.