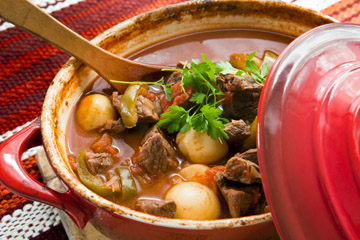 It's another cold one out there, and after a long hard day at work, the last thing you want to do is slave over the stove to cook a decent supper. Luckily, you've prepared for today and can walk into your home and be welcomed by the scent of a stew wafting through the air, enticing you to a warm dinner.

Even though no one's been home, your meal is just about ready thanks to your slow cooker. This small electric appliance, a staple of many homes for more than 30 years, is based on the principles of slow cooking. The concept of slow cooking is simple: Put food into some sort of container or contained area and let it cook slowly. It's a method used in barbecue pits and pig roasts, where low temperatures and a lot of time allow meat to become tender. Slow cooking can be done via dry heat, as in an oven or roaster, or it can be moist, by involving liquid during the cooking process. Slow cookers use moisture in a unique way because they remain sealed during the cooking process. As food cooks and lets off steam, the condensation collects inside the device and acts as a baster.

The slow cooking method has been around for centuries, and the electrical slow cooker first became popular in the 1970s kitchen -- the original slow cookers came in chic colors of the day, such as avocado and goldenrod. But when microwaves came into vogue a few years later, the slow cooker was left behind as people started zapping their food. However, the tide has turned back to slow cooking and new cookbooks that provide a variety of tasty recipes for this one-pot wonder. Manufacturers developed newer, more stylish versions of the device, which led to its resurgence over the last decade as a must-have appliance for time-strapped cooks. In the next section, we'll look at how a pot for preparing beans revolutionized cooking.

The Slow Cooker Device: How It Cooks

The slow cooker was developed from an electrical bean pot, a pot that was invented in the 1960s to steep dry beans. Small-appliance manufacturer West Bend produced The Electric Bean Pot, which spawned a copycat product by rival Naxon Utilities Corporation called The Beanery. The Rival company, today owned by Jarden, acquired Naxon and in 1971 released a reworked Beanery as the Crock-Pot, a slow cooker that could produce full meals in one pot. The Crock-Pot took off as a time-and-money-saving device for career women who still wanted to cook, and the brand became as ubiquitous as Kleenex. In fact, a 2002 Betty Crocker Kitchen study showed that more than 80 percent of U.S. households owned at least one slow cooker [Source: Bittman]

The outer casing is metal and contains low-wattage heating coils, the component responsible for cooking the food, and these heating coils are completely encapsulated by the outer casing. The inner container, which is also called a crock, is made of glazed ceramic and fits inside the metal heating element. In some models, you can remove this cooking crock from the outer shell. The third piece of the appliance is a domed lid that fits tightly onto the crock.

The appliance cooks based on a combination of wattage and time. When turned on, the electrical coils heat up and transfer heat indirectly from the outer casing to the space between the base wall and the stoneware container. This indirect heat warms the crock to between 180 and 300 degrees Fahrenheit (82 to 149 degrees Celsius). This method of heat transfer simmers the ingredients inside the crock at a low temperature for several hours, until the food is thoroughly cooked.

As the food cooks, it releases steam, which the lid traps. The condensation creates a vacuum seal between the lid and the rim of the crock, which adds moisture to the food while helping the cooking process -- the lid is integral to the cooking process. The slow cooker typically has three settings: low, high and off. In programmable slow cookers, the device will switch to a warm setting after it has cooked the food to keep the meal at a proper temperature.

Benefits of Using a Slow Cooker

Using a slow cooker is a great way to save time and still prepare a nutritious meal. Assemble the meal in the morning, put it in the slow cooker, and at the end of the day, dinner is ready -- without much mess or many dishes to clean. The device requires only a small amount of electricity only to do its work -- compared with a standard oven, a slow cooker uses a lot less energy, so it won't heat up an entire kitchen the way an oven does.

The high and low settings on the device allow you to adjust the temperature for the length of time you want the meal to cook. Although cooking on low is completely safe, if you're home during the process, the U.S. Department of Agriculture recommends cooking on high for an hour first to ensure the food is thoroughly cooked.

The first slow cookers came in only one style, but today they come in all shapes and sizes. There are manual cookers, programmable cookers with digital timers and small cookers designed solely for heating dips. Today's slow cookers can be either round or oval to accommodate different types of food, and they range in size from one to seven quarts.

What to Cook in a Slow Cooker 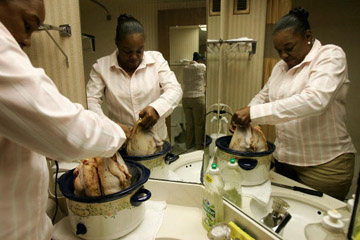 Meats are one of the most popular items to make in a slow cooker, but they need to be thawed beforehand or they'll take too long to cook. When cooking meat, it's important to heat the meat to 140 degrees Fahrenheit (60 degrees Celsius) as quickly as possible to kill any bacteria. Always make sure the internal temperature of the meat is within recommended guidelines before serving. When cooking poultry, use poultry with the skin still attached -- this will help keep the meat moist throughout the cooking process.

Prepping vegetables for slow cooking may take longer to prepare than the meat -- it's important to cut them uniformly so they'll cook evenly. Vegetables may also take longer to cook than meat, so when preparing stews or meat-and-vegetable dishes, layer the vegetables on the bottom of the pot.

Some of the best slow cooker meals are soups and stews because the slow cooker is designed to simmer on the low setting for long periods of time. Cover soup ingredients with water, and if you need to add more liquid during cooking, bring it to a boil first, so it doesn't lower the soup's cooking temperature.

Dips and spreads are another category where slow cookers shine. The low heat keeps a cheese-based dip warm without burning the ingredients, and maintaining a dip at a low heat prevents ingredients from congealing during a party.

Grains are sometimes a surprising way to use a slow cooker. Oatmeal, cracked wheat and rice porridge can be cooked overnight to provide a hot, nutritious breakfast. Bread and bread-based dishes like stuffing can also be baked in a slow cooker -- the low heat setting also helps bread dough rise. Another surprising slow-cooking category is desserts. While rice and tapioca puddings may seem like a no-brainer, you can also use slow cookers to make hot fruit desserts and even cakes.

Some recipes call for adding ingredients near the end of the cooking time because of the nature of the ingredients and their tolerance for the slow-cooking process. Spices and herbs may become too concentrated during cooking, so be sure to adjust their levels at the end of the process. Likewise, some vegetables, dairy products and seafood will lose their flavor and texture if simmered for too long, so if the recipe calls for including them near the end of the process, be sure to follow the directions carefully.

Slow cookers are designed to cook for several hours at a time and heat food properly, but you should still practice some safety precautions.

Never fill the stoneware container more than two-thirds full, and keep the lid on throughout the cooking process to maintain ideal cooking conditions inside the container. Periodically, you should test the cooker to make sure the unit heats correctly and is able to cook food to a proper serving temperature. Food should cook to at least 140 degrees Fahrenheit (60 degrees Celsius) within four hours to avoid harboring bacteria.

To test your slow cooker, fill it one-half to two-thirds with water, cover it with the lid, and cook on the low setting for eight hours. Then, use a food thermometer to monitor the water temperature before it cools. If the temperature is 185 degrees Fahrenheit (85 degrees Celsius) or higher, the slow cooker is safe to use. A lower temperature may indicate that the heating element isn't functioning well enough to cook food thoroughly [source: Peterson-Vangsness, Glenyce].

Slow cookers run off a low wattage, so it's safe to leave the house while it's on. Although the base does heat up, the product is designed to not get so hot that it'll set a countertop on fire.

Never immerse the base of a slow cooker in water. If your slow cooker doesn't have a removable insert, use a soapy sponge to clean the inside and wipe away any spills.

Temperature extremes can cause the stoneware insert to crack, so you shouldn't freeze it or use it over direct heat, like a stovetop. Also, never put a hot crock on a cold counter -- use a hot pad to protect the ceramic. Likewise, if the pot is still hot, don't pour cold water into it.

Thaw meat and poultry thoroughly before adding them to the cooker. Before serving, use a thermometer to make sure they're hot enough.

When using beans in recipes, remember that you can't use dry beans in a slow cooker. Dry beans, especially dry red kidney beans, contain a toxin called Phytohaemagglutinin, which can cause nausea, vomiting, diarrhea and abdominal pain. Soaking and boiling dry beans helps remove this toxin to make beans safe to eat -- in a slow cooker, the temperature never gets hot enough to heat up dry beans sufficiently [source: U.S. Food and Drug Administration]. If you're using dry beans for your recipe, first soak them for a minimum of 12 hours, rinse them, and then boil them for 10 minutes. Another safe option is to use canned beans, which have been boiled prior to the canning process.

You should use a slow cooker only for cooking -- never for reheating. Any leftovers should be stored in shallow containers and refrigerated within two hours of the meal. To reheat, use another cooking method, such as a stovetop or microwave, to reheat the food to a temperature of 165 degrees Fahrenheit (74 degrees Celsius).