Can solar atmospheric water generators help save on energy costs? 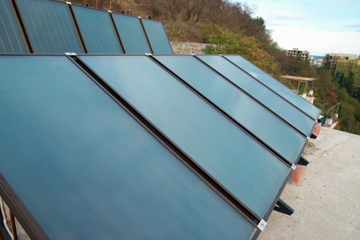 Solar panels like these can help garner water power -- and save money.
iStockphoto/Thinkstock

Solar atmospheric water generators (AWGs) can be excellent options in hot, humid areas -- especially where electricity is unavailable or unreliable, and water quality is poor. They extract water from humid air by harnessing the power of the sun instead of using electricity. Employing solar power is almost always less expensive than using electrical power, but there's a catch. Solar technology is usually more expensive to purchase than comparable equipment that uses electricity.

Although there are a number of technologies that extract water from air, the most common for domestic use employs a process similar to the way air conditioners operate: Warm, moisture-laden air is passed over a chilled surface medium like a plate or coil, to reduce its temperature. Since cool air can't hold as much water as warmer air, condensation forms. In an air conditioner, the moisture is channeled to a collection dish, or drain, and the cooled air is circulated back into the room. In a water generator, the moisture is harvested and filtered repeatedly to remove bacteria and particulates. The more humid the air, the easier it is for a water generator to harvest water vapor efficiently. This cooling condensation method of atmospheric water harvesting is popular, but it uses a lot of energy.

Where water generators using refrigerant as a fundamental part of the water extraction process are popular, particularly for small volume applications, there are other water extraction technologies in use that may be more compatible with solar power. For industrial and some military applications, there are water generators that use a chemical process involving special salts called desiccants. These desiccant salts absorb moisture from the air, and equipment then extracts the moisture from the salt. The exact process manufacturers employ is proprietary. It's usually accomplished by boiling the salts to create steam. The steam is then condensed and harvested. The process can be very energy efficient when a vacuum is used in the boiling chamber, because a vacuum will lower the boiling point of water, requiring less energy to generate steam. Desiccant water generators use less energy than cooling condensation water generators, which makes them a technology to watch.

A solar water generator can be very cost-effective in a straight energy consumption comparison, but there are a couple of other things to consider. Because high humidity is seasonal in many areas, water generators operate most effectively during the summer months. This is often when electricity is in greatest demand. Solar cells can charge in diffuse light, but perform better when the days are longer.

Water generators also need a relative humidity of around 40 percent or more, and a temperature of at least a few degrees above freezing to work efficiently. This means that there may be times when any water generator will have trouble extracting water from the air and alternative sources of water will be necessary. If there just isn't enough light, solar water generators are often equipped with electrical backup power. They'll use solar power when it's available and revert to electricity when it's not. When using electricity as a backup, the electrical power necessary to operate a water generator designed for home use is comparable to the power necessary to run a small space heater or personal computer.

What about Tap Water?

Before you explore other options for safer drinking water, take the time to check your current municipal water quality. You may be pleasantly surprised by what you discover. The Safe Drinking Water Act requires that water suppliers serving more than 100,000 people publish an annual water quality report. You can request a copy of the report for your area by calling the customer service contact on your water bill or visiting the EPA's Consumer Confidence Report Page for more information.