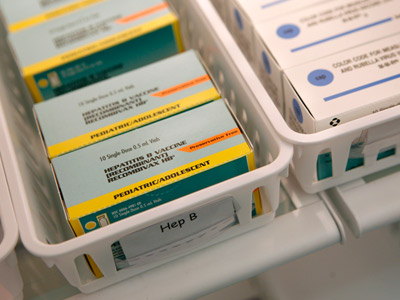 Vaccines like the ones above need to stay cold in order to remain fresh.
AP Photo/Charlie Neibergall

­When most of us think of "solar power," we think of panels of photovoltaic cells. A refrigerator introduced in 2009 by British student Emily Cummins used a far more literal version of solar power.

Cummins' refrigerator uses no photovoltaics, no electricity, no chemical refrigerant and no moving parts to produce a cooling effect. Instead, it uses an evaporative-cooling system based entirely on the sun's heat and some water. It's an ideal setup for poverty-stricken Third World villagers with no electricity and no money to spend on a fancy PV system. It is already being used in South Africa and Namibia. (It could also work for a hard-core environmentalist looking for a guilt-free cold one after a long day at work.)

The fridge is brilliantly simple. It's made of two cylinders, one inside the other. The outer cylinder can be made of almost anything on hand -- cardboard, wood or plastic, typically, with holes in it to allow the greatest possible sun access. The inner cylinder is metal. The space in between the inner and outer cylinders is filled with materials like wool, sand or dirt.

The evaporative-cooling system works like this: You place food or medicine inside the inner metal cylinder and close it up. You then pour fresh water into the area between the cylinders, saturating the organic material, and place the whole setup in the sun. As the sun warms the outer cylinder and heats up the wet organic material, the water evaporates. Just like in a traditional fridge, evaporation removes heat (that's why we sweat -- when the sweat evaporates, we cool down). The organic material is touching the inner cylinder, so this heat transfer pulls heat from the inner cylinder holding the food. The result is a very cold inner chamber.

This process is repeated as the water evaporates fully, so water is continually replenished and the cooling continues. The refrigerator can stay at 43 degrees F (6 degrees C) for several days on a single water infusion [source: Flahiff].

This system has no battery backup, so it relies on a good supply of sunlight. Countries like Namibia, with an average of perhaps 10 hours of sunlight a day in some areas, are ideal candidates for this solar-powered setup [source: BBC].

That's always the potential drawback of any solar-powered necessity: Sunlight is seldom guaranteed. In more high-tech PV refrigerators, backups in the form of batteries or generators are common in order to avoid system failure. The low-tech eco-fridge relies entirely on nature to keep things cold.