Is stainless steel on its way out?

Browse the article Is stainless steel on its way out? 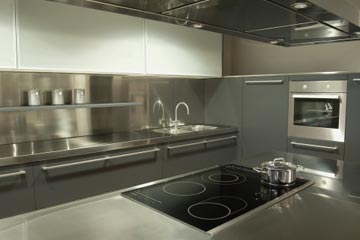 Is this look on the way out? Check out these home design pictures!
iStockphoto/Thinkstock

Whoever said all good things must come to an end clearly did not have a stainless steel toaster.

In recent years, a small, but vocal cadre of homemakers and interior designers have turned their backs on the iron-based alloy that has long been a fixture in kitchens across the country, declaring stainless steel "out." Yet, there the shiny, modern surface remains, showing up in microwaves, refrigerators and coffeemakers from Baltimore to Santa Barbara [source: Pandey].

Composed of at least 11 percent chromium, stainless steel earned its handle based on the material's natural ability to retain an unscathed, "stainless" appearance despite being subjected to a wide range of heat, splatters and spills. Its resistance to stains and corrosion as well as bacteria, make stainless steel a popular choice for kitchen appliances. It also has also come to represent a distinct, sleek look that many people associate with modern elegance [sources: Qiu, Dickinson].

Stainless steel has had a home in the kitchen for more nearly a century. "It is functional as well as good looking and timeless," says Fitzhugh Karol, an artist who makes custom furniture for interior design firm The Brooklyn Home company.

It also requires a significant amount of upkeep: While the material wards off bacteria and stains, stainless steel apparently has a soft spot for fingerprints, which must be constantly wiped off in order to keep appliances smudge-free [source: Dickinson].

So is stainless steel here to stay or will it go the way of formica and laminate? Read on to find out.

Stainless Steel: Not Out

"I think stainless will always be in style," says Fitzhugh Karol, noting that material that looks good and works well doesn't exactly grow on trees. Not to mention that stainless steel remains a fixture in restaurants and on cooking television shows. "It often nods to commercial cooking which resonates with some people," Karol says.

In fact, stainless steel continues to be an overwhelmingly popular choice for kitchen designs, according to the Association of Home Appliance Manufacturers. The material is so routinely used that designers consider steel a neutral tone, which can blend in with other colors in the kitchen while providing a contemporary look [sources: Kitchen Solvers, Dickinson].

That's not to say that the wave of stainless steel won't eventually crest and begin to roll back, however. Those sounding the death knell say it's just a matter of time until a suitable replacement comes along. Already in places like Europe and Israel, kitchen designers have turned to white appliances, often combined with glass surfaces [source: Construction Supply Alliance].

So is white the new stainless steel? As in many debates -- whether about politics, the war on drugs or how many licks it takes to get to the center of a Tootsie Roll Pop -- the answer probably lies somewhere in the middle. "White appliances can be great too. I see us mixing them in for a certain look," Karol says. "There's room for both."

Thus it appears that reports of stainless steel's death have been exaggerated. Follow the links on the next page for ideas on how to incorporate it into your kitchen.

When I recently moved into a new apartment, it was like being launched to some strange, unfamiliar and empty planet. After living with roommates for several years, I quickly realized that I didn't have anything to fill my new digs with, especially in the kitchen. One of the first things I did was stock the fridge. That was nice, but there wasn't much I could do with all the fresh food without some basic supplies. More than a month later, I may not have a couch and the TV may still be on the floor, but the kitchen is teeming with stainless steel.