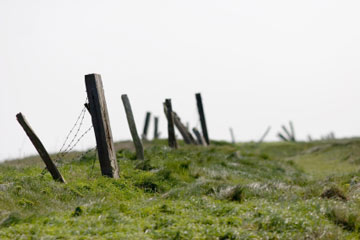 Not all lawns (or fields) are the same. Bumpy terrain, wet turf and inclines all pose potential trouble for your tractor.
©iStockphoto/SteveStone

Zero-turn mowers use two rear transmissions to distribute energy, one powering each of the rear wheels. This is beneficial for creating zero-radius turns; with one rear wheel moving faster than the other, the moving wheel can initiate the turn and serve as the pivot point for the zero-radius circle. The transmissions of both rear wheels are operated independently, usually with a system called lap bars.

The big trouble with zero-turn mowers is found in the front wheels. Standard zero-turn mowers use casters in the front, wheels that pivot 360 degrees. The casters aren't attached to any part of the drive train; they move based on the motion initiated by the rear wheels. This allows for quick and easy movement around a zero-radius turn -- in theory.

The Synchro-Steer system was designed to overcome resistance found in the front wheels by never allowing it to generate in the first place. The solution is to initiate the turn at the front wheels, but control the speed at the rear wheels.

For example, when a left (counterclockwise) turn is initiated, the linkage to the left rear transmission slows the speed of the left rear wheel. This moves the power to the right rear wheel, which carries out the zero-radius turn. Since the turn was initiated among the front wheels, there's no resistance to overcome, and hence no turf damage from plowing in the front or skidding in the rear.

It seems the Synchro-Steer engineers managed to combine Ackerman's steering with John Reiger's mower, while cutting Barney Oldfield out of the picture once and for all.

For lots more information, ride on over to the next page.