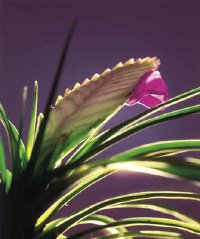 Tillandsia, with about 500 species, is the largest genus in the bromeliad family. It probably has the greatest range of any genera since it is found growing from the southern United States to southern Argentina. It was named after Elias Tillands, a 17th century Finnish professor of botany.

These epiphytic bromeliads will grow on almost anything. When the plants have roots, they use them to hold on to a perch. Moisture and nourishment enter through the gray scales on the leaves.

Tillandsia caputmedusae, from Mexico, has twisted, felty, silvery-grey leaves growing from a celery-like base. The pale blue flowers grow on a short flower stalk.

Tillandsia cyanea, from Ecuador, has a rosette formed from narrow leaves that have reddish-brown markings near the base. Large, lavender-blue flowers bloom from the large, flat, bright pink inflorescence. This is a spectacular indoor plant.

Tillandsia usneoides (Spanish moss, vegetable horsehair, old man's beard) grows from the southern United States to Argentina. Its silvery-gray, string-like masses are not parasitic but sometimes damage trees by blocking out the light or by suffocating them.

Spanish moss is very difficult to keep alive indoors. Since it looks much the same dead or alive, you can keep it hanging around -- dead -- for years.

Has reading about bromeliads encouraged you to start flexing your green thumb? To learn more about gardening, see:

Cucamelon: Not the Love Child of a Cucumber and a Watermelon
Gypsy Baby's Breath
How to do Landscaping on a Budget