How the Toto Washlet Works

Browse the article How the Toto Washlet Works 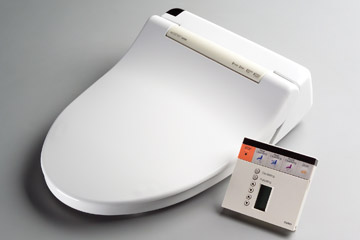 The Washlet is like an electronic bidet that sits on top of the toilet and has a control panel.
Courtesy of Toto USA

Whether you call it the toilet, loo, water closet, restroom or bathroom -- everybody uses it. But how everybody uses it differs all over the world, as bathroom technology tends to vary from region to region. Much of the Eastern world uses a squat toilet, which is often nothing more than a porcelain-lined hole in the ground that may or may not include a flushing mechanism (and often requires you to bring your own toilet paper). In most of Europe, you'll find a bidet, which sprays a stream of water to clean the genitals after use. And in the United States, most people use a flush toilet that allows sitting -- or squatting -- and the use of toilet paper. But some companies, such as Japan-based Toto, have recently started to lead a revolution that combines the bidet with the Western toilet.

Toto's creation, the Washlet, is a unit that fits onto standard flush toilets, allowing users the comfort of American sit-down toilets with the cleansing rinse of a bidet's water jet after finishing their business. There are four models of the Washlet available in the U.S., ranging in cost from about $880 to more than $2,200. The pricier the model, the more bells and whistles it offers. Users can opt for a simple version, the C110, which has rear- and front-cleansing options, water pressure and temperature control and a heated seat. The most advanced model, the S400, includes all those perks plus a warm-air drying feature, an automatic air purifier, an auto-flush option and more. With a laundry list of multiple key features, the Washlet can be customized for even the pickiest user.

Washlet proponents argue that the unit's gentle spray of water offers a more hygienic cleaning than a wad of triple-ply toilet paper does. But skeptics question whether a machine is as easy to clean off with as your hands. For instance, how does the high-tech seat know when it's time to rinse? Additionally, will Americans -- who have been reluctant to use bidets -- open this advancement with open arms? We'll find out in this article. But first, let's take a look at the European device that helped inspire the Washlet to begin with.

History of the Bidet

The word "bidet" was first used around the 16th century to refer to pet ponies that the French royalty kept. As a receptacle that people straddle (like a pony), the bidet is believed to have been an invention of French furniture makers in the late 17th or early 18th century, but no single inventor gets credit for the idea. Throughout the 18th century, only the wealthiest European homes had bidets, which were often decorated with fancy adornments such as rosewood veneer, gilded bronze and crystal flakes. In fact, when Marie Antoinette set off on her journey from Vienna to France to marry the dauphin in 1760, her coach was supposedly equipped with a bidet decked out with red velvet and gold embroidery [source: Ashenburg].

In those days, people bathed their whole bodies only about once a week. The original bidet -- nothing more than a bowl with water that was splashed onto the genitals by hand -- cleaned sensitive areas between regularly scheduled baths. Conservatives of the time worried that the bidet's increase in popularity could lead to an increase in promiscuity, as people began to take better care of their private parts. Although the toilet -- or least the basic idea of one -- had existed at least since 2500 B.C., the bidet got people thinking differently about cleanliness. This newfound interest in hygiene also made people realize that hands and faces weren't the only parts of the body that needed to be washed [source: Ashenburg].

With European plumbing improvements in the 1900s, bidets were mechanized and finally moved from the bedroom into the bathroom. Yet most Americans weren't exposed to bidets until the late 1930s, when World War II soldiers began visiting French brothels. Why bidets became popular throughout Europe, some Asian countries (Korea, Japan and Taiwan) and even South America but not the States is a question with no definite answer. Some speculate that installing a bidet in addition to a toilet requires too much space, or that Americans simply weren't accustomed to the idea and saw no need to change their habits.

The electronic bidet hit the market in 1960, combining the bidet with the toilet, and it slowly began to make its way into American culture. The Toto Washlet, a more advanced version of the electronic bidet, has sold more than 17 million units worldwide since the product's release in 1980. The Washlet arrived in the United States in 1990, and U.S. sales figures have since increased [source: Altman]. Can they continue to engrave themselves into American bathroom culture? Let's find out. 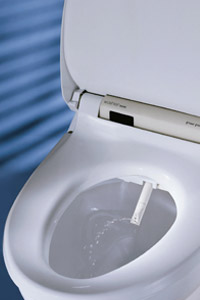 The Washlet's spray wand is user-controlled to adjust the water temperature and pressure.
Courtesy of Toto USA

If you're considering a Toto Washlet for your home, you should first take a look at what kind of toilet you already have. The Washlet is not a complete toilet unit, but instead a high-tech seat that gets mounted on top of an existing toilet. Toto also makes toilets that are compatible with the Washlet, but it's possible to use the Washlet with other brands as well. Before purchasing a unit, you might consider visiting the manufacturer's Web site to see what kind of Washlet will fit on your toilet -- they come in round and elongated shapes and are made to fit one- and two-piece toilets.

To allow the unit to fit properly, the existing toilet must have at least 1.75 inches (4.5 centimeters) of space between the front of the toilet tank and where the seat bolts would be mounted. Because the unit has automated controls, there must be a grounded electrical outlet within 3 feet (about 1 meter) of the toilet so you can plug it in. Professional plumbers are qualified to install the unit, but installation instructions come with the unit, so you may be able to take a DIY approach. The Washlet has several key parts:

In addition to these main functional parts, one other feature that the Washlet model boasts is the self-cleaning nozzle. It is sensor- or remote-operated as part of the jet spray wand, and it cleanses the wand by passing through a sheet of water as it extends -- and then again as it retracts. The wand is built from antimicrobial plastic and has an additional silver ion coating, which is said to fight the growth of microorganisms.

Now that you know how the Toto Washlet works, read on to find out whether it lives up to its claims and really is better for the environment.

Is the Toto Washlet good for the planet and our bodies?

One of the key ideas behind the Toto Washlet is that it benefits the environment by reducing the amount of toilet paper people need to use. Americans alone use 36.5 billion rolls of toilet paper -- or the equivalent of 15 million trees -- each year. On top of that, simply producing the soft ply uses up more than 473 billion gallons of water, and then packaging and shipping require energy and resources, too [source: Thomas]. Bidet supporters argue that toilet paper is also detrimental to sewer systems because of frequent clogs and the constant need to be emptied. Although people sometimes still use toilet paper after using the bidet, they likely use less than they would without it.

The Washlet may help to reduce the use of toilet paper, but what about the water supply needed for the spray mechanism? According to Toto, the device uses less than a gallon of water per day for the average family. Users can determine the length of the cleansing cycle (can be as brief as 20 seconds), but the water usage ranges from about 9 to 30 ounces per minute for front and rear cleanses [source: Toto]. This doesn't affect the water used for flushing, however.

Another environmental benefit the Washlet boasts is its energy efficiency. You can set the entire unit to shut down after a pre-determined length of time (three, six or nine hours) to prevent wasting energy [source: Toto]. However, it should be noted that energy and water are still expended with each use, as well as through the manufacturing and shipping of the Washlet.

Besides the environmental benefits, are there any personal pluses? One big question is whether bidets are really as sanitary as wiping. On one hand, one might argue that wiping isn't so sanitary to begin with, and not properly washing your hands afterward can spread germs. However, some experts caution that bacteria can build up in the Washlet's or bidet's spray faucet and also lead to infection. But new advancements -- such as the self-cleaning nozzle -- may make that less of a concern. In fact, the water jet may even be more soothing for people with rashes, hemorrhoids or even rough skin from excessive wiping [source: WebMD]. Bidets also may help relieve symptoms of urinary tract infections and inflammatory bowel diseases.

From bidets and squat toilets to self-cleaning stalls and composters, experts are working diligently to create the next toilet that's best for the planet and our bottoms.

Keep reading for lots more information on the Toto Washlet and other toilet technology.