Browse the article What veggies can you grow in a shady yard? 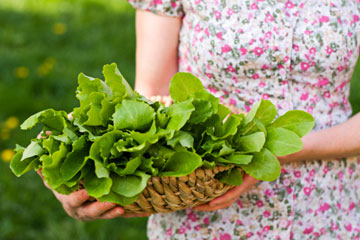 So, you want to grow a vegetable garden, but trees and buildings shade your yard for much of the day. Sure, you could take a chainsaw and a wrecking ball to everything that casts a shadow (like a crazy maniac). But there's a much less drastic solution: Plant veggies that grow well in low-light conditions.

Vegetables, like all plants, convert sunlight, water and carbon dioxide into sugar and oxygen in a process known as photosynthesis. They use the sugar to fuel basic functions like growth and reproduction, then store what's leftover in the delicious stems, roots and fruits that we harvest for salads and stir fry. Generally speaking, the more sunlight a plant gets, the more energy it's able to generate and the more yummy veggies it will produce. For this reason, plants located in partial shade may not be as luxuriant and robust as those that hang out in full sunlight, but many will still yield great-tasting edibles.

Just like you wouldn't power a flashlight that takes four batteries with just one, you shouldn't plant vegetables that require a lot of energy in a shady garden. Leafy greens, which require as little as two hours of full sunlight a day, are your best bet. These include lettuce, spinach, Swiss chard, arugula, endive, radicchio, kale, mustard, cabbage and bok choy. Herbs like cilantro, chives, mint and lemon balm will also grow in these shadowy conditions. With a little more sunlight -- around four hours daily -- you can also raise root vegetables like potatoes, beets, carrots and turnips. The worst vegetables for a shady garden are those that fruit from a flowering plant, like tomatoes, cucumbers, peppers, squash and eggplants. Without six or more hours of full sunlight per day, these energy-guzzlers will produce little more than frustration.

Maximizing Light in a Shady Garden

In a shady garden, every bit of light is important. Where you locate your garden and how you arrange it can affect the quality and quantity of its yield.

When selecting a place to plant your garden, figure out where the sun shines the most in your shady yard. The best way to do this is to familiarize yourself with the way the sun tracks across the sky. Everyone knows that the sun rises in the east and sets in the west, reaching its highest point in the sky around noon. This means that gardens on the east or west side of a fence or building will receive about a half day of sun if nothing else shades it. Another characteristic of the sun, at least in the Northern Hemisphere, is that it always shines from the south half of the sky. As a result, gardens located on the north side of a structure will get little or no direct sunlight, while those planted on the south side can potentially receive sunlight all year long.

Once you've chosen a location for your garden, avoid creating shade where it doesn't already exist. Don't put taller plants at the south end of your plot; they'll cast shadows on shorter ones to the north. When installing a fence, planting a tree, or building a shed, first think about how it could affect the sunlight in your garden. If it's going to create more shade, consider another location.

As you can see, gardening in the shade isn't impossible. Experiment to see what works best for you, and with any luck you'll soon be enjoying a delicious meal with produce from your own shady backyard.

No Sun, No Problem

There are some artificial ways to enhance the natural sunlight in your shady garden. If there are walls or fences around your plot, paint them a light color to reflect sunlight back onto the plants. You could also try using reflective mulches, which look like aluminum foil and redirect light up to the plants from the ground.

What spring veggies can you grow in a shady yard? That's the exact question I asked myself as I looked at the barren flowerbed by the back stairs of my new apartment. I'd always been envious of my friends with big, sunny gardens filled with the most delicious tomatoes, peppers and squash you'll ever eat. I wanted to plant some veggies, too, but since my little patch only gets about three hours of full sunlight a day I wasn't sure that anything would grow. Thanks to what I learned writing this article, though, I'm looking forward to a tasty harvest of spinach and lettuce this fall.