From Camping Yurts to Luxury Yurts: The Yurt Today 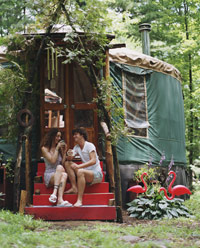 Yurts started appearing in North America in the 1960s. On the East Coast, a Harvard student named Bill Coperthwaite was inspired by photos of gers in National Geographic and used his dissertation as an opportunity to build the structures. On the West Coast, a group known as the Hoedads was living in the Oregon forests planting trees and realized that the structure suited their lifestyle. Bill Coperthwaite went on to start the Yurt Foundation, and those that worked with him and with the Hoedads started the first yurt manufacturing companies in North America.

Yurt sales are growing about 10 percent each year; the early adopting West Coast and Pacific Northwest lead the way, with the East Coast and even the Midwest starting to grow as well [source: Schoettle]. One manufacturer estimates that about 10,000 yurts are in use throughout North America [source: Darlin].

As we mentioned in the introduction, the yurt has made some high-profile appearances on campgrounds. The trend started in Oregon, when parks manager Craig Tutor saw yurts displayed at the Oregon State Fair and bought them for state parks. They provide some of the comfort of a cabin, but are much cheaper to maintain. When surveyed by the Oregon Parks and Recreation Department in 2003, yurt users said the structure made camping much better, due to amenities like heat, a dry shelter and convenience [source: Bingham].

Yurts don't always turn a major profit, but park officials report that they do get more people interested in camping. Oregon parks currently charge $27-$30 per night for a basic yurt that sleeps five, and $45-$66 for a deluxe yurt that sleeps seven [source: Oregon Parks and Recreation]. Studies have shown that campers won't pay more than $50 a night unless some luxury features like fireplaces or hot tubs are involved [source: Lohse].

Luxury features upgraded the humble sheep herder's tent into a structure that can be used as a home, an office, a school or even a sauna room and gym. While yurts may start at about $4,000 from most manufacturers, the sky's the limit in terms of what may be the final cost, as users install gutter systems, electricity, plumbing, French doors and ceiling fans. Several yurts can be linked to create more space, and they can be partitioned so that there's more than one room, though you'll have to give up the modern day conception of square corners.

Yurts are now almost all over the world, so whether you're planning a trip to Costa Rica or Europe, staying in a yurt might be an option. Australia, New Zealand and Japan are some of the countries that import traditional yurts from Mongolia. At certain festivals and events in Britain, you might see the Sushi Yurt, a traveling restaurant that serves Japanese cuisine. The Scottish Storytelling Yurt also travels around and may be rented with a storyteller.

Skiers in Idaho and Utah can stay in yurts, and those in Park City, Utah, might choose to take a sleigh ride to the Viking Dinner Yurt. At 8,000 feet (2,438 meters) above sea level, the Viking Dinner Yurt provides fine meals and was even ranked as one of the most romantic places to propose in America by the "Today" show [source: Park City Yurts].

Why are so many people falling in love with the yurt? We'll look at some reasons on the next page.­