No Strings, No Connections: ZeroHouse Overview 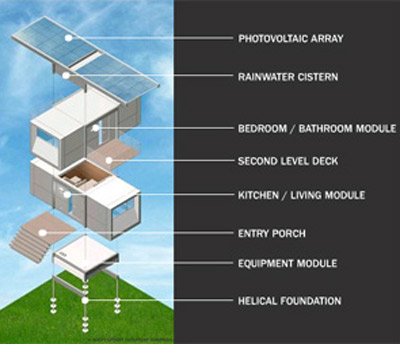 In this diagram, you can see easily see the layout of the house's "modules."
Specht Harpman

Even though this design is unbuilt, the ambitious zeroHouse was the winner of the Texas Society of Architect's Design Award in 2007. The architect Scott Specht, of Specht Harpman, claims the design will comfortably fit four adults, despite only being 650 square feet. Here's a rundown of the specifications:

If you shy away from making design choices, the zeroHouse might be right for you. As a prefabricated house, many of the furnishings are already picked out and built-in for the owner. These furnishings include:

As a prefabricated construction, the zeroHouse comes with built-in amenities, such as the couch and TV.
Specht Harpman

However, if you want to flash your personal design flair, you'll still have the option to customize your zeroHouse to a certain degree. For instance, you can communicate your preference on certain materials and color patterns, including the exterior color of the house.

In addition to other amenities, the house has an LED lighting system built into the walls and ceilings. These lights are dimmable, but, more importantly, they're high-efficiency. Unlike incandescent light bulbs, they don't convert much of their energy into heat. Rather, more of their energy goes toward emitting light, which saves the house energy for other things.

The structure will require little maintenance. Panels on the outside of the building consist of materials that are scratch and dent resistant. These materials also deter general wear and tear, and to prevent corrosion the steel frame is bonded and powder-coated.

The architect uses every possible aspect of the house to conform to the needs of comfort and efficiency, including the quirky exterior design. The structure's different layers, called modules, are alternately rotated to provide inhabitants shade and decks.

If you're worried about feeling secure in the zeroHouse, rest your head. Not only is there a fully-mortised locking system, but doors incorporate Kevlar material (a material five times stronger than steel by weight) and the windows have SentryGlas, which lends impact resistance.

Specht conceived this project specifically for people who want to reduce their ecological footprint and who have the money to spend on that goal. For instance, the structure can serve as a guest house or as a weekend getaway for the wealthy. The initial price is estimated at about $350,000, which, at a total size of only 650 square feet, places it at $530 per square foot. Specht hopes, however, that demand will soon increase supply, driving down the costs of prefabrication [source: Livingston].

The architect hopes to have the first zeroHouses built by the end of 2008 [source: Livingston]. How will this house run without the aid of power lines? Read the next page to find out.

Too Close for Comfort?

To many people, 650 square feet seems too small to comfortably fit four adults. However, the architect argues that tiny accommodations translate to a tiny ecological footprint and energy-efficiency. The house's built-in features and overall design help to maximize the available space [source: West].