It Really Ties the House Together: The ZeroHouse Brain & Anchors 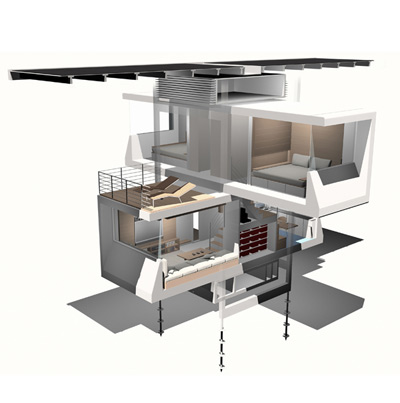 Notice the four helical anchors that lend the zeroHouse stability without disturbing the environment too much.
Specht Harpman

One system in particular helps to keep the owner in control of the different features of the house. The architect calls this the "house brain," and it makes the entire house automated. Using special sensors mounted around the house, the house brain can keep track of activities. The brain regulates the power usage in the house. It even has a hibernation status to maintain the house when it's not in use. The system is web-based, so inhabitants can keep an eye on this system via their computer.

The zeroHouse has a light touch, and not just because of its virtually nonexistent ecological footprint. The house's foundational system literally has minimal impact on the ground where the house sits. The four helical anchors keep the foundation solid while not disrupting the landscape. The architect orchestrated the foundational system this way so that the structure touches the ground at only these four points. This makes the house well suited for sites where more disruptive construction is difficult or not allowed.

Though these anchors have only a slight impact on the earth, it will take more than the huff and puff to blow the zeroHouse down. The anchor system, in conjunction with the tubular steel frame of the house, allows the house sustain up to 140 miles per hour (225 kilometers per hour) winds. In fact, the structure of the anchors supposedly allows the house to sit safely on a slope of up to 35 degrees or even in up to 10 feet of water.

The zeroHouse makes living off the grid seem like a plausible reality. However, skeptics point out that green technology remains highly expensive and is therefore not tenable on a wide scale. But, for those concerned about global warming, the possibility of living without a dependence on energy that results in the release greenhouse gases is tantalizing. Time will tell whether the zeroHouse can stand up to rough environments, the dwellers' energy demands and the critics.

Take a look at the links below to learn about other green buildings and sustainable technology.

Already impressed by the zeroHouse design, one Chinese developer wants to build a community that includes 15 zeroHouses to show off the design's amazing features [source: Livingston].