Should you worry about getting sick from the dorm bathroom? 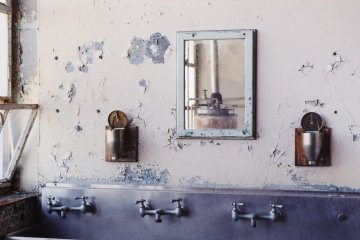 Presumably this isn't representative of the state of affairs in your dorm bathroom.
© Henrik Kam/Corbis

Sure, it's nausea-inducing to imagine the insidious germs that slink around a communal shower or crowd the toilet handle of a shared bathroom. But let's be honest: Is it the anything-goes behavior marking most dorm bathroom stories that really causes our stomach to churn? The drunken trysts in shower stalls and the bouts of alcohol poisoning no doubt make for good dorm horror tales. Do they also breed an unhealthy atmosphere?

You bet. Germs are loitering like delinquents on the toilet seat, the bathroom floor, the sink, the soap dispenser -- you name it. That brings us to a larger point: Germs are everywhere. If you were to swab virtually any space -- public or otherwise -- you'd be able to find bacteria, viruses and a host of things we'd consider "dirty." But is a shared space like a dorm bathroom actually more likely to get us sick? And how much should you disinfect, sanitize and fret about your health while using such a space?

Let's start by defining what we're talking about. Depending on how your dorm is set up, you might have a generally communal space with several shower and toilet stalls, plus sinks and counters, ostensibly. You might also have a single shower and toilet, shared by several different rooms if you're living in a suite-style arrangement or something similar. Either way, you're sharing a space with other people and thus introducing lots of germs into the environment. Not just your own, of course, but those of multiple users.

Because these pathogens are everywhere, however, we can't pinpoint a shared bathroom as the filthiest of the filthy. Read on to find out more about why dorm bathrooms may be dirty ... but perhaps not as dangerous as you think.

Bac(teria) It Up With Facts 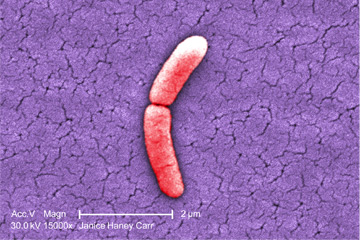 If you're developing anxiety that your dorm bathroom is nothing more than a glorified petri dish, be warned: It is. The good news is that pretty much anything with a surface is just as filthy, and bathrooms -- even those shared by people only casually interested in hygiene -- are probably no more harmful to us than our own handbag. Or kitchen. Or keyboard.

Yes, our purses, regularly scrubbed kitchens and tended-to computers have all been shown to carry just as many microbes as the bathroom toilet. Or, as one study that took 280 samples from eight office kitchens so delicately put it, 75 percent of office kitchens are harboring more bacteria than a "female sanitary bin" [source: Innes]. Or hey, turns out that a dorm room refrigerator handle has twice as many bacteria as shared dorm toilet handles, so take heart [source: Reckitt Benckiser].

Of course, that doesn't mean dorm bathrooms (or public restrooms in general) are "clean." One 2011 study found that yes, public restrooms are in fact teeming with germs -- in fact, there was a surprising diversity of bacteria in a bathroom, from soil to skin contaminants [source: Flores et al.]. But that doesn't mean the bathroom is likely to make you ill more often or more seriously.

A lot of folks assume that pathogenic bacteria and other microbes -- especially from others -- should be eradicated in order to have a "clean" environment. And that's kind of true, if you reflect on how strapping they are. Consider that if every single salmonella organism were destroyed -- minus one -- that little guy (doubling every 30 minutes) would be able to give everyone in the world diarrhea in less than a week [source: Adler]. It's enough to make you want to not just bleach your entire dorm bathroom, but also your roommate, while you're at it.

Don't get out the hazmat suit yet though. As we pointed out, there aren't a lot of surfaces in the world that aren't harboring bacteria and viruses. Read on to find out if being exposed to more germs (not to mention the people who carry them) is putting you at greater risk.

The Dose Doesn't Make the Poison

When sharing a bathroom with a few folks, you might be asking yourself if more people make an environment more unsanitary, or more liable to make someone sick. The answer seems to be that yes, being around more people does leave you more susceptible to everyday issues like a cold or a stomach bug. So if you're sharing a bathroom, sure you might find yourself exposed to more airborne or contact illness.

But that's a little misleading, because your likelihood of getting sick isn't just a matter of coming in contact with germs. If so, we'd all be sick constantly, with the E coli strains that hang out on our desks or the staph that's present on the kitchen counter. Instead, our health depends on how healthy we are in general. If you have a good immune system -- or even just an OK one -- you're not going to catch every little thing. In fact, it might just be that some people are genetically predisposed to get more colds and viruses [source: Neighmond].

So what does this mean when trying to stay healthy in a dorm bathroom exposed to all sorts of contagious, icky things? Essentially, it comes down to the same things you've been told since you started kindergarten. Good hygiene -- like thoroughly washing your hands in hot water for a full 20 seconds, with attention given to the nails -- does a bang-up job at preventing you from picking up germs you don't want. Getting some sleep (no small order in a dorm) and doing small things like not washing your dishes in the bathroom might go a long way toward keeping your immune system healthy and avoiding cross-contamination [source: Haupt].

So the bottom line is this: You should worry about getting sick from the dorm bathroom about as much as you should worry about getting sick from sitting in the chair of your crowded lecture hall. Although being in an environment that exposes you to lots of germs isn't going to help your health, it probably isn't going to go too far harming it. Your immune system, your hygiene and your genes are really what are keeping you healthy -- or making you sick.

Author's Note: Should you worry about getting sick from the dorm bathroom?

The scientific community has long known that dismissing (or killing) all microorganisms isn't doing anyone favors. With the Human Microbiome Project in full swing, the knowledge about all the good our microscopic friends bring is spreading. If you're still grossed out by bacteria, do yourself a favor: read about fecal transplants to get a balanced look at the bad -- and good -- bacteria can do.

10 Spots in the Dorm Bathroom Everyone Forgets to Clean
10 Tips for Surviving Communal Bathrooms
Should you keep your toiletries in your dorm room?

5 Dorm Room Accessories You Really Do Need
5 Dorm Tips for First-time Roommates
Should you live in an apartment or a dorm?