What are atmospheric water generators? 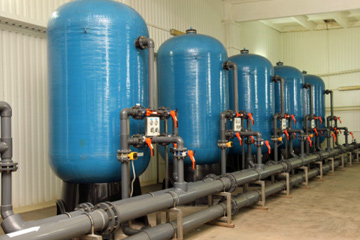 Water tanks like these will hold the purified, reclaimed water.
iStockphoto/Thinkstock

All air contains at least a little water. On hot, muggy days, the air feels thick and uncomfortable because it's saturated with moisture. Water generators, also known as water makers, harvest the moisture suspended in humid air. They use one of two basic methods. The most common employs technology similar to another appliance in your home, your air conditioner. Warm air passes over a set of coils that are chilled using refrigerant. Because cool air can't hold as much water vapor as warm air, the cold air leaves behind condensation that's routed to a drain or pan for disposal. In a water generator, the goal isn't to cool the air to make interior rooms more comfortable. The goal is to reclaim that condensation, filter it, and then store it in a carafe or other holding tank. The reclaimed water is filtered a number of times to take out airborne particles and bacteria as part of the process. If the water sits in the reservoir for longer than a day or so, it's filtered again to keep it fresh and clean.

This type of water generator is the most popular for domestic use. The technology is well known and understood. Air conditioners, refrigerators and dehumidifiers all use it to one degree or another. It can be an energy hog, though. Cooling-style water generators rely on compressed refrigerant cycling through the system with the help of a compressor, condenser, a pump and a fan. Some domestic water generator manufacturers claim the energy consumption is similar to running a desktop computer or small space heater in your home.

Another option, and one sometimes used in large scale applications like military or industrial use, employs a water extraction method that relies on chemistry. It uses a cocktail of chemical salts to pull water out of the air. Salt is a natural desiccant, which means that it draws and holds moisture. In desiccant based water generators, humid air passes over a salt mixture. The wet salt is then heated to the boiling point. The steam is condensed and routed to filters for processing. To save on energy, a vacuum is employed to lower the boiling point of water. One big advantage to desiccant-based atmospheric water generation is that it's more energy efficient than the other practical options currently available.

Atmospheric water generators extract water from the surrounding air and filter it to remove particulates and bacteria. The resulting water is clean and free of chemicals and other hazards. In areas where water is scarce or polluted, atmospheric water generators are reliable sources of clean, safe water. For domestic applications, they can reduce or eliminate the need for bottled drinking water.

Atmospheric water generators don't work everywhere. To work effectively, a few conditions must be met: The temperature of the ambient air has to be at least a few degrees above freezing. The humidity should be above a certain concentration, too. The figure varies depending on the manufacturer and method of extraction, but 32 to 40 percent humidity is in the ball park. High altitude can also interfere with the process.

Electricity and fossil fuels aren't the only ways to power atmospheric water generators. Solar power is an energy efficient option, too. Actually, a form of passive water generation existed centuries ago: the air well (or dew harvester). It's widely believed that air wells designed to promote condensation were used by the ancient Greeks to provide water to entire communities. Technologically advanced versions of the air well are being developed today for use in areas where there is a shortage of safe drinking water.

Light with Modern Art
What is the International Green Construction Code?
What are pan head machine screws?