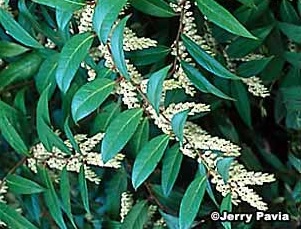 , the flowers appearing before the leaves.

The dwarf fothergilla (Fothergilla gardenii), native to the southeastern United States, is a low-growing shrub, while the large fothergilla (Fothergilla major), which is similar, can attain heights of up to ten feet. The tip of each of the spreading branches is decorated in early spring with a cluster of white, very fragrant, petalless flowers, creating the typical bottlebrush appearance of the shrub. Its leaves, rounded but somewhat irregular, don't appear until later. They are dark green, turning bright shades of yellow, red, and orange before dropping in the fall.

How to grow: This shrub requires an acidic, peaty, sandy loam with adequate moisture but good drainage. Although it does well in partial shade, it blooms best in full sun.

Uses: The dwarf fothergilla is a choice plant for borders, foundation plantings, and mass plantings. No pruning is required.

Pi Can Help You Determine the Age of Your Trees
How to Plant a Pine Tree
What types of plants thrive in the fall?