by Josh Peterson, Planet Green
Next 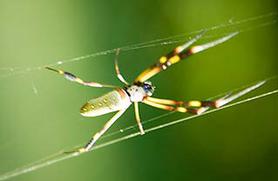 Spiders are creepy. They have eight legs and a bunch of messed-up looking eyes. They shoot webs out of their hinders and have crazy, bitey mandibles. The kicker: Some spiders are poisonous and can kill you, paralyze you or rot your flesh. That's horrible. No wonder everyone is against spiders. But maybe you shouldn't be.

Most spiders don't harm humans. In fact, they help us.

Spiders are beneficial inhabitants of any garden, ecosystem, or home because of their important contributions to biological control of pest insects. Spiders are considered to be the most important terrestrial predators, eating tons of pest insects or other small arthropods every year. Spiders are generalist predators that are willing to eat almost any insect they can catch. They are abundant and found in most habitats. They only need to be left alone!

Spiders are voracious hunters and will reduce the amount of pests in your garden. However, spiders will also go after bees and other favorable insects. Spiders aren't aggressive like mantises, so importing the arachnids to your garden isn?t going to quash an aphid outbreak. However, their very presence will reduce garden pests. (And no chemicals!)

Like the good Doc says, all you have to do is leave them alone.