17 Plants that Will Kill Your Cat and Why Poinsettias Won't

by Melissa Breyer
Next 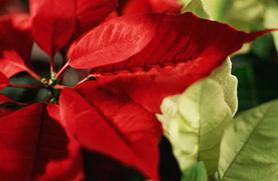 Poinsettas are more likely to cause stomach problems than death.
Stockbyte/Getty Images

It's possible that poinsettias get the bummest rap in all of the plant world. They?ve got a bad-girl reputation as deadly beauties, but is the ubiquitous holiday plant actually toxic? About 70 percent of the population will answer yes, and although every year there is a bumper crop of stories explaining otherwise?the myth persists. In reality, ingestion of excessive poinsettia may produce only mild to moderate gastrointestinal tract irritation, which can include drooling and vomiting?kind of like drinking too much brandy-spiked eggnog? The poor poinsettia, so misunderstood?

It all started back in the early part of the 20th century when the two-year-old child of a U.S. Army officer was alleged to have died from consuming a poinsettia leaf. As these things have a habit of doing, the toxic potential of poinsettia has become highly exaggerated?and many a cat-keeper now treat poinsettias as persona non grata (or, as the case may be, poinsettia non grata) in their households. Keeping this plant out of the reach of your pet to avoid stomach upset is still a good idea, but according to the ASPCA, you need not banish the poinsettia from your home for fear of a fatal exposure.

So poinsettias, consider yourself absolved. As for the other holiday fave? Mistletoe has the potential to cause cardiovascular problems (and not just from forced smooches)?however, mistletoe ingestion usually only causes gastrointestinal upset. But there are other common household plants that have been reported as having some serious systemic effects?and/or intense effects on the gastrointestinal tract on animals.

The ASPCA's list of 17 top toxic plants to steer your kitty away from.

Lilies. Members of the Lilium family are considered to be highly toxic to cats. Many types of lily, such as Tiger, Asian, Japanese Show, Easter, Stargazer, and the Casa Blanca, can cause kidney failure in cats. While the poisonous component has not yet been identified, it is clear that with even ingestions of very small amounts of the plant, severe kidney damage could result.

Marijuana. Ingestion of Cannabis sativa by companion animals can result in depression of the central nervous system and incoordination, as well as vomiting, diarrhea, drooling, increased heart rate, and even seizures and coma?even if they don?t inhale. But cats can get all the same fun without the buzz-killing side effects from marijuana?s cuz, catnip!

Sago Palm. All parts of Cycas Revoluta are poisonous, but the seeds or "nuts" contain the largest amount of toxin. The ingestion of just one or two seeds can result in very serious effects, which include vomiting, diarrhea, depression, seizures and liver failure.

Tulip/Narcissus Bulbs. The bulb portions of Tulips and Narcissus contain toxins that can cause intense gastrointestinal irritation, drooling, loss of appetite, depression of the central nervous system, convulsions and cardiac abnormalities.

Azalea/Rhododendron. Members of the Rhododenron family contain substances known as grayantoxins, which can produce vomiting, drooling, diarrhea, weakness and depression of the central nervous system in animals. Severe azalea poisoning could ultimately lead to coma and death from cardiovascular collapse.

Oleander. All parts of Nerium oleander are considered to be toxic, as they contain cardiac glycosides that have the potential to cause serious effects?including gastrointestinal tract irritation, abnormal heart function, hypothermia and even death. Castor Bean. The poisonous principle in Ricinus communis is ricin, a highly toxic protein that can produce severe abdominal pain, drooling, vomiting, diarrhea, excessive thirst, weakness and loss of appetite. Severe cases of poisoning can result in dehydration, muscle twitching, tremors, seizures, coma and death. Cyclamen. Cylamen species contain cyclamine, but the highest concentration of this toxic component is typically located in the root portion of the plant. If consumed, Cylamen can produce significant gastrointestinal irritation, including intense vomiting. Fatalities have also been reported in some cases. 9 more toxic plants to keep away from your cat, including chrysanthemums and ivy. Kalanchoe. This plant contains components that can produce gastrointestinal irritation, as well as those that are toxic to the heart, and can seriously affect cardiac rhythm and rate. Yew. Contains a toxic component known as taxine, which causes central nervous system effects such as trembling, incoordination, and difficulty breathing. It can also cause significant gastrointestinal irritation and cardiac failure, which can result in death. Amaryllis. Common garden plants popular around the holidays, Amaryllis species contain toxins that can cause vomiting, depression, diarrhea, abdominal pain, hypersalivation, anorexia and tremors. Autumn Crocus. Ingestion of Colchicum autumnale by pets can result in oral irritation, bloody vomiting, diarrhea, shock, multi-organ damage and bone marrow suppression. Chrysanthemum. These popular blooms are part of the Compositae family, which contain pyrethrins that may produce gastrointestinal upset, including drooling, vomiting and diarrhea, if eaten. In certain cases depression and loss of coordination may also develop if enough of any part of the plant is consumed. English Ivy. Also called branching ivy, glacier ivy, needlepoint ivy, sweetheart ivy and California ivy, Hedera helix contains triterpenoid saponins that, should pets ingest, can result in vomiting, abdominal pain, hypersalivation and diarrhea. Peace Lily (AKA Mauna Loa Peace Lily). Spathiphyllum contains calcium oxalate crystals that can cause oral irritation, excessive drooling, vomiting, difficulty in swallowing and intense burning and irritation of the mouth, lips and tongue in pets who ingest. Pothos. Pothos (both Scindapsus and Epipremnum) belongs to the Araceae family. If chewed or ingested, this popular household plant can cause significant mechanical irritation and swelling of the oral tissues and other parts of the gastrointestinal tract. Schefflera. Schefflera and Brassaia actinophylla contain calcium oxalate crystals that can cause oral irritation, excessive drooling, vomiting, difficulty in swallowing and intense burning and irritation of the mouth, lips and tongue in pets who ingest. What do do? Should your cat eat part of a poisonous plant, promptly bring your cat to your veterinarian. If you can, take the plant with you for ease of identification. If you think that your animal is ill or may have ingested a poisonous substance, contact your local veterinarian or the ASPCA 24-hour emergency poison hotline directly at 1-888-426-4435. Get more holiday decorating tips from New Holiday Traditions [i]At Care2, we believe that individual actions can collectively make a difference. Whether you start making differences in your home, your community, or across the globe, we are glad to help you on your journey. Join us today! With more than 11 million members, Care2 is the largest online community of people making a difference in healthy and green living, human rights and animal welfare. Join us today!