Can you soundproof your living space?

Browse the article Can you soundproof your living space? 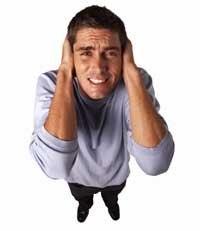 Noise can get under your skin like an invisible irritant. The mufflerless motorcycle that rumbles past your house at 4 a.m., rousing you from precious sleep. The wannabe rock star upstairs that blares the bass. The chatty roommate who talks incessantly near your shared wall. All you ask for is a little peace and quiet.

In the war on unwelcome noise, you're not a defenseless victim. Although you probably won't be able to keep sound totally in or out of a room or house, you can certainly minimize the aural agony for you and your neighbors. Without tearing down a single wall panel, you can become the master of sound instead of allowing it to make you miserable.

Before we go into soundproofing methods, you may be wondering how sound creeps around with such stealth. Moderate volumes of conversation, music or television can seep through the walls like a noxious gas. The reason boils down to the fact that sound is a series of vibrations that move surrounding particles. That series of vibrations, or sound waves, carries the noise from the boom box across the room to our ears.

Because it requires particles to carry along the vibrations, sound cannot travel in a vacuum. Think about being in a stadium, and a row of people start doing "the wave." If stands beside them are empty, the cheer will stop. Likewise, the more densely packed those particles are, the better the sound moves through, since the particles don't have to do much to jostle the surrounding ones. When you're in an open field, however, sound won't carry as well because the particles are more spread out. In fact, the farther sound waves have to travel from one point to another, the fainter the sound will become.

When sound waves collide with a solid surface -- say, your bedroom wall -- there are a few things that can happen. The surface will reflect some of those vibrations back toward the source, it will absorb some of the sound by converting the vibrations into heat energy or it will transmit it to the other side, into your room.

Read on to find out how these sound properties work inside of your home.

If noise is bothering you to the point that you want to take soundproofing steps, you can come at it from two angles: noise transmission and noise reception. Perhaps you practice on an electric guitar every night and don't want your neighbors to complain about your intense jam sessions -- that's a transmission issue. As that noise-barraged neighbor, you'd want to block that sound out, in other words, block the reception.

The next question is what type of sound you're dealing with. You know that chest-pounding feeling you get when you pull up beside a car with bass blasting through a subwoofer? Those indoor noise vibrations your body feels are referred to as structure-borne. Overhearing a conversation or knowing what's on a neighbor's tube is called airborne noise [source: Sound Isolation Company].

Muffling those audible aggravations involves three different avenues: space, mass and dampening. Space increases the amount of air between your ears and the source, diffusing the noise by taking away the vibration channels. Mass, such as a hefty wall, can act as a sound sponge, soaking in the waves. Dampening sound requires specific materials, insulation for instance, that will convert structure-borne sound waves to heat energy [source: acousticalsolutions.com].

On the next page, we'll learn the simplest and cheapest ways to keep sound in and out of your humble abode.

By taking advantage of sound properties, scientists in Spain may have come up with a theory that can end our soundproofing woes. They want to create sonic crystals, or specialized particles that guide sound waves around them, preventing any wave reflection or transmission, literally halting the noise in its path [source: BBC]. Essentially, the material would make an object "invisible" to sound waves. Unfortunately, for those with boisterous neighbors, the cloaking material is in the earliest stages of development.

How to Soundproof a Room 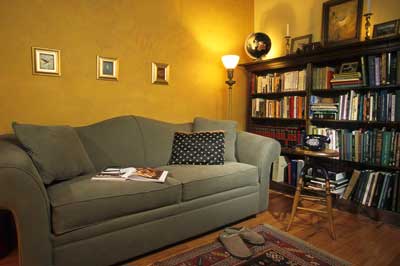 Most audio domestic doldrums relate to sound reception, so we'll cover these techniques first. If you have a larger budget and are handy with a drill, you could add a double wall or dropped ceiling to bring the volume down. Although this article won't focus on heftier DIY soundproofing projects like these, the concept behind them is important. Basically, you are building an extra space for air to trap and dissolve the sound because sound does not travel alone. Once the sound waves cross through that first wall, the added space helps to halt some of the sound because there's a drop in particle density. Construction plans also often call for filling those gaps with insulation as an added sound absorber.

Sound is absorbed by converting the vibrations of sound waves into heat energy. Fibrous materials such as insulation or foams make effective sound barriers because the strands absorb the vibration, creating heat in exchange. This is why area rugs on hardwood and tiled floors tame down the noise. Thick drapes can reduce sound volumes by up to 10 decibels when strategically placed [source: Berendt]. To put it in perspective, that would take you from a noisy restaurant to a quiet conversation at home [source: dangerousdecibels.org].

If you're the one making the racket in your living space, you can make your own soundproofing panels from Styrofoam and fabric as well [source: Oldham]. You can also install different shapes of foam or other porous material on walls to act as diffusers. Diffusers or acoustic panels help with sound transmission by altering the shape and surface of a wall to minimize and direct the amount of wave energy that bounces from one side of the room to the other [source: Elsea]. Just avoid concave shapes since it will draw the noise toward the wall [source: Elsea].

As mentioned earlier, you can literally block sound out with mass. Large bookcases or bureaus against common walls could help insulate rooms. Concrete items in particular work well because their mass and porous quality absorbs some of the vibrations.

When soundproofing in the home, one step that can greatly improve the situation is plugging up the crevices that sound burrows through. We're talking the cracks around baseboards, slits around window seals, you name it. Flexible caulking and weather stripping can seal the deal for these amplifiers. Door sweeps that block the area between the door and the floor allow for opening and automatically flip back down when it closes. You can even purchase foam gaskets that fit behind the plates on your electrical outlets that can make a difference [source: Warde].

Apartment tenants with loud upstairs neighbors get the short end of the soundproofing stick. Warding off this type of noise is the most difficult to accomplish since the best step would be for the neighbors to install carpets with insulating foam between it and the floor. On your end, the most effective step is building a dropped ceiling, which landlords likely wouldn't go for. To fight fire with fire, consider purchasing a white noise generator. By simulating the ultimate sound of silence, the device may cloak the unwelcome vibes you're getting.

For heavier duty soundproofing options and related information, browse the links on the next page.