Exotic Houseboats Around the World 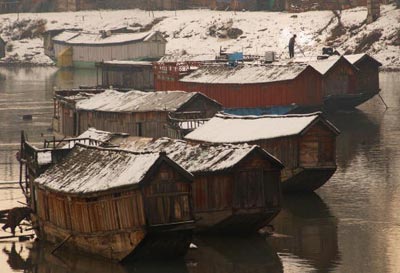 Depending on where you travel around the world, houseboating will always be a different experience. Some countries mainly attract tourists by renting houseboats to vacationers, while in other cultures people live permanently in houseboats.

In the United States, houseboating is becoming an increasingly popular tourist activity, where people will rent a houseboat for weekends, long weekends or weeklong vacations. Lake Cumberland in Kentucky is considered the birthplace of houseboating in the U.S. [source: Regional Technology Strategies]. Other popular houseboating locations include Lake Powell in Utah, Dale Hollow and Center Hill Lakes in Tennessee, Lake Lanier in Georgia and Lake Mead outside of Las Vegas, Ariz. Other places in the U.S., particularly Lake Union in Seattle, Wash., have prominent houseboating neighborhoods where people live. The 79th Street Boat Basin off the shores of Manhattan in New York City also has a small, permanent community, where dwellers can live for about $500 a month [source: New York Times].

India has the best of both worlds. Many rivers in India have communities where houseboats are a person's primary dwelling, but those same regions may offer houseboat trips and rentals. Dal Lake in Srinagar, located in the Kashmir region of India, is well known for houseboat trips, while dwellings in the state of Kerala are typically moored. Despite the draw for tourism, locals from both areas may live year-round in houseboats.

Amsterdam, the capital of the Netherlands, is famous for the many houseboats found along its canals. People can either rent houseboats here, or houseboats can serve as a second home or a vacation home for locals. Amsterdam even has the Houseboat Museum, which is an old boat called the "Hendrika Maria." Built in 1914 and renovated into a houseboat in the '60s, it's only a five minute walk from the Anne Frank House. You can see more at the Houseboat Museum's official Web site. Other countries with prevalent houseboating tourism and communities are the United Kingdom, Canada, Australia and New Zealand.

Some houseboat manufacturers are also picking up on green trends, designing special houseboats that have less of an impact on the water and the surrounding environment. One houseboat you can see on Inhabitat is a good example -- situated in the Arctic, it's a prefab home that can be built on-site, and its highly insulated interior reduces the need for heating power. These modern houseboats on Inhabitat, built in Denmark, have solar power and thermal heating from the water and are also built with prefab steel.

For lots more information on boats and all things maritime, cruise over to the next page.