How to Grow a Lawn

How to Use Ornamental Grasses

Ornamental grasses can make your lawn unique, and allow you to opt for the level of care and maintenance you can provide.

Using Ornamental Grasses
Ornamental grasses add grace to any garden. With their array of colors, textures, and sizes, ornamental grasses add year-round interest. They even become animated when wind weaves in and out of their leaves. Only your imagination limits their use in your garden. Whether as a specimen or a massed planting, grasses can be used for screening, accent, focal point, or to frame a view. Since grasses are found over the entire earth, you're certain to find a variety to suit your decorative and cultural needs. 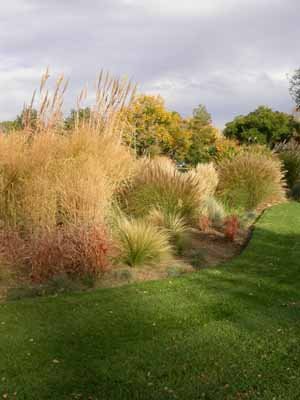 Ornamental grasses, shrubs, and border plants can be mixed together effectively.

Before the warm-season grasses begin to show much life after dormancy, cool-season grasses burst into quick, lush growth. They bloom early in the season. When frost comes, the foliage and seed heads turn a bright golden tan and continue to offer a fine display through winter.

Warm-season grasses remain dormant through the winter. When the weather and soil has warmed up sufficiently, they grow rapidly. Warm-season grasses are best left alone except for an annual cutting back at the end of winter. They thrive on hot, long days and, once established, are tolerant of drought conditions. Most require a long growing season to flower in late summer and autumn, when many garden perennials have ceased blooming.

Ornamental grasses are also grouped as to how they grow. Some grasses form dense clumps, others spread by stolons or rhizomes. Clump grasses are easiest to use unless you have unlimited space to allow the grass to roam.

Clump grasses will stay where you plant them, but give them ample space to grow. Determine each variety's space needs and expect a properly tended grass to mature in three years. Grasses that spread will quickly invade the space of other nearby plantings unless they are planted in an area where you can contain their growth.

Ornamental grasses require little maintenance. Most varieties prefer well-drained soil in full sun; some varieties tolerate partial shade. Fertilizer needs are low; over-fertilization results in tall, lush growth that may require staking. Enjoy the grasses throughout the winter season; they add interest when nearly everything else is dormant.

In late winter, cut the grasses down to allow for new growth, but be careful not to cut too low since damage to the growing shoots may occur. Two to six inches, depending on the size of the grass, should be sufficient. 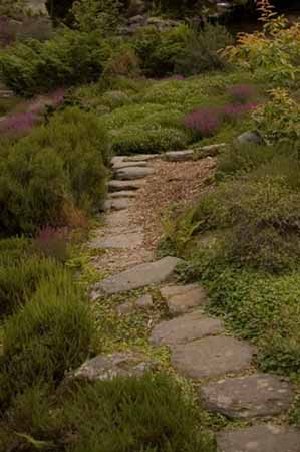 A garden pathway edged with ornamental grasses is peaceful and inviting.

Designing with grasses is easy. Use small grasses as edging plants; they're often hardier than many commonly used edging plants. Try planting a bank with two or three varieties of grasses; use taller varieties behind shorter ones to create a feeling of depth. Grasses mixed with perennials tie materials together during interim periods when one season's blooms have finished and the next season's blooms have yet to begin.

Ornamental grasses are an excellent choice for an unusual ground cover. They have appeal throughout the year, and there are many varieties to choose from.

Ornamental grasses also serve as effective screens from early summer through winter. Choose varieties that will grow to at least eye level. Space the plants so they will form an impenetrable mass at maturity. Mix in evergreens to form a deep screen for all seasons.

Any single, large ornamental grass can be used as a specimen plant. Use grass as a focal point in an open garden, or use a giant variety to break up expansive spaces. A single, fine-textured upright specimen breaks the monotony of a flat, coarse-textured planting.

Grasses are also well suited to container growing, as long as they receive the moisture and nutrients necessary for continual growth. Some ornamental grasses are invasive in some regions. Check your state's weed list before you plant.

In the next section, you'll learn how to plant a lawn from seed.

For more information on lawn care and related topics, try these: