How to Repair Major Appliances 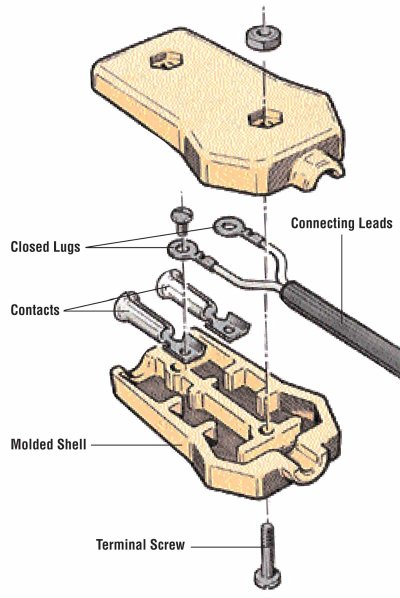 ©2006 Publications International, Ltd. When a female plug malfunctions, open it and check  the conductor wires. If the wires are loose, tighten the terminal screws. For other problems, replace the plug.

Major appliances have many components in common, making repairs easier. For example, once you've learned to repair a power cord on a refrigerator, you can apply the same skills to repairing a washing machine's power cord.

The following sections explain common devices that are used on major appliances and offers tips on how to repair them.

Many appliance "breakdowns" are really due to worn, frayed power cords or plugs that no longer make proper electrical contact. To ensure safe operation, you should check all appliance cords for problems periodically and replace frayed or broken cords immediately. When you suspect a cord is faulty, remove it from the appliance and test it with a continuity tester. Clip the tester to one blade of the plug and touch the probe to one of the two wires -- or, if it's a plug-in cord, insert the probe into one of the two holes -- at the appliance end of the cord. If the tester lights or buzzes, move it to the other wire or hole and test again. Repeat this procedure to test the other blade of the plug. If the tester lights or buzzes at every test point, the cord is not faulty; if it fails to light or buzz at any point, the cord or the plug is faulty. You can pinpoint the defect by cutting off the plug and testing the cut end of the cord; if the tester lights or buzzes at all test points now, the plug is the defective part. The damaged component -- cord, plug, or both -- should be replaced.

In some equipment, the conductor ends are looped around terminal screws, making new connections easy. Carefully strip off the outer insulation (not the insulation on the inner wires) for about 2 inches at the end of the cord. Then, using a wire stripper, remove about 1/2 inch of insulation from the end of each conductor wire. Twist the exposed filaments of each wire clockwise into a solid prong. Loosen the terminal screws and loop each bare wire end clockwise around a screw. Tighten the screws firmly. Connect the wires at the appliance end of the new cord the same way the old wires were connected.

If only the plug on a major appliance is faulty, you can attach a new plug to the old cord. Male plugs, with two blades or with two blades and a grounding prong, plug into an outlet. Female plugs, often used at the appliance end of the cord, have terminal holes instead of blades. Male plugs can usually be taken apart so you can access the terminal screws. Female plugs may be held together by rivets or by screws. Screw-held plugs can be taken apart, but rivet-held plugs cannot be repaired.

When a plug malfunctions, open the plug, if possible, and check to make sure the conductor wires are properly attached to the plug's screw terminals. If the wires are loose, tighten the terminal screw. This may solve the problem; otherwise, the plug should be replaced. To attach a new male plug:

Step 1: Insert the cord end through the plug opening and pull it through for about five or six inches.

©2006 Publications International, Ltd. On a two-wire plug, tie a tight underwriters' know with the inner  wires (top). If there is a grounding wire, tie the knot as shown (bottom).

Step 2: Carefully strip off the outer insulation for about 2 inches. Then, using a wire stripper, remove about 1/2 inch of insulation from the end of each conductor wire.

Step 3: Twist the exposed filaments of each wire clockwise into a solid prong. After twisting the conductor ends, tie a tight knot with the inner wires of the cord. Then pull the plug down over the knot, leaving the exposed ends of the conductor wires sticking out. Loosen the terminal screws in the plug.

Step 5: When the conductor wires are firmly secured to the terminal screws, slide the cardboard insulator over the blades of the plug. If the plug has a clamp-type sleeve, clamp it firmly around the cord.

In the next section, we will delve deeper into your appliances, and learn how to repair gaskets, wiring, switches, and thermostats.