Browse the article How Icemakers Work 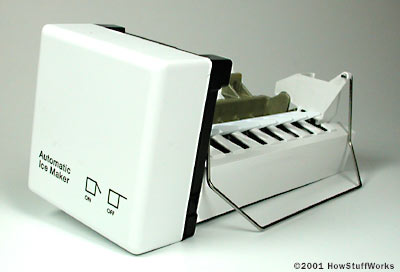 A standard home icemaker that you install in your freezer

Only a century ago, ice was hard to come by in most parts of the world. In hotter climates, you had to buy your ice from a delivery service, which imported hefty blocks from a colder climate or from an industrial refrigeration plant. The price of ice was relatively steep, but if you wanted to keep your food cold, you didn't have much choice. In the hottest parts of the world, ice was a rare luxury. In an equatorial country, you might live your whole life and never even see a piece of ice.

This all changed in the early 20th century. Compact, affordable refrigerators brought the means of food preservation and ice production into the home and corner store. In the 1960s, new automatic icemaker machines made life even easier. These days, most Americans take ice completely for granted, even during the hottest days of summer.

In this article, we'll find out what's inside a typical home icemaker, as well as the larger commercial icemakers you might find at a hotel or grocery store. As we'll see, the basic process of making ice is very simple -- you just freeze water -- but spitting out perfectly shaped ice cubes is a fairly elaborate process.

The home icemaker's predecessor was the plastic ice tray. It's fairly obvious how this device works: You pour water into a mold, leave it in the freezer until it turns to a solid and then extract the ice cubes. An icemaker does exactly the same thing, but the process of pouring water and extracting cubes is fully automated. A home icemaker is an ice-cube assembly line.

The home icemaker is a miniature ice-cube assembly line.

In the next section, we'll look at the cycle an icemaker goes through to make ice. 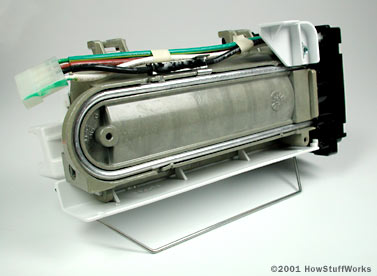 The icemaker has a heating coil underneath the ice mold.

When everything is hooked up, the icemaker begins its cycle. The cycle is usually controlled by a simple electrical circuit and a series of switches. In the diagram below, you can see how the icemaker moves through its cycle.

This system is effective for making ice at home, but it doesn't produce enough ice for commercial purposes, such as restaurants and self-service hotel ice machines. In the next section, we'll look at a larger, more powerful icemaker design.

There are any number of ways to configure a large, free-standing icemaker -- all you need is a refrigeration system, a water supply and some way of collecting the ice that forms.

One of the simplest professional systems uses a large metal ice-cube tray, positioned vertically. You can see how this system works in the diagram below.

In this system, the metal ice tray is connected to a set of coiled heat-exchanging pipes like the ones on the back of your refrigerator. If you've read How Refrigerators Work, then you know how these pipes work. A compressor drives a stream of refrigerant fluid in a continuous cycle of condensation and expansion. Basically, the compressor forces refrigerant through a narrow tube (called the condenser) to condense it, and then releases it into a wider tube (called the evaporator), where it can expand.

Compressing the refrigerant raises its pressure, which increases its temperature. As the refrigerant passes through the narrow condenser coils, it loses heat to the cooler air outside, and it condenses into a liquid. When the compressed fluid passes through the expansion valve, it evaporates -- it expands to become a gas. This evaporation process draws in heat energy from the metal pipes and the air around the refrigerant. This cools the pipes and the attached metal ice tray.

The icemaker has a water pump, which draws water from a collection sump and pours it over the chilled ice tray. As the water flows over the tray, it gradually freezes, building up ice cubes in the well of the tray. When you freeze water layer by layer this way, it forms clear ice. When you freeze it all at once, as in the home icemaker, you get cloudy ice (see How do you make clear ice cubes? for more information).

After a set amount of time, the icemaker triggers a solenoid valve connected to the heat-exchanging coils. Switching this valve changes the path of the refrigerant. The compressor stops forcing the heated gas from the compressor into the narrow condenser; instead, it forces the gas into a wide bypass tube. The hot gas is cycled back to the evaporator without condensing. When you force this hot gas through the evaporator pipes, the pipes and the ice tray heat up rapidly, which loosens the ice cubes.

Typically, the individual cube cavities are slanted so the loosened ice will slide out on their own, into a collection bin below. Some systems have a cylinder piston that gives the tray a little shove, knocking the cubes loose.

This sort of system is popular in restaurants and hotels because it makes ice cubes with a standard shape and size. Other businesses, such as grocery stores and scientific research firms, need smaller ice flakes for packing perishable items. We'll look at flake icemakers next.

In the last section, we looked at a standard cube icemaker design. Flake icemakers work on the same basic principle as cube icemakers, but they have an additional component: the ice crusher. You can see how a typical flake system works in the diagram below.

Like the cube icemaker design we examined in the last section, this machine uses a set of heat-exchanging coils and a stream of water to build up a layer of ice. But in this system, the coils are positioned inside a large metal cylinder. Water passes through the cylinder, as well as around its outer edges. The passing water gradually builds up a large column of ice surrounding the cylinder from the inside and outside.

As with a cube icemaker, a solenoid valve releases hot gas into the cooling pipes after a set length of time. This loosens the ice column so it falls into the ice crusher below. The ice crusher breaks the ice cylinder into small pieces, which pass on to a collection bin.

The size of the ice bits depends on the crusher mechanism. Some crushers grind the ice into fine flakes, while other crushers produce larger, irregularly shaped ice chunks.

There are many variations on these designs, but the basic idea in all of them is the same. A refrigeration system builds up a layer of ice, and a harvesting system ejects the ice into a collection bin. At the most basic level, this is all there is to any icemaker.

For more information on icemakers and related topics, check out the links on the next page.