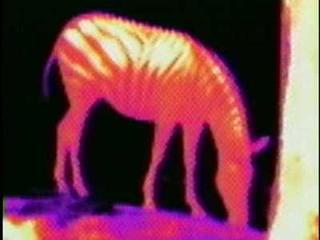 How much do you know about infrared waves?
NASA

Few meals are more difficult to replicate at home than a perfectly juicy tenderloin from a high-end steakhouse. Although encrusting a slab of meat with seasonings and heating it on both sides for a few minutes seems like a simple proposition, consumer grills have traditionally lacked one important feature: an infrared cooking surface capable of emitting heat so intense that it completes the cooking process in only minutes.

But wouldn't such high-end technology cost a fortune? Infrared grills typically cost upwards of a few thousand dollars per unit -- until the year 2000. That's when a time limit on key patents worked in the favor of backyard grillers.

The evolution of infrared grills began in 1961 when Bill Best, founder of Thermal Engineering Corp., patented the first infrared burner. It was used for industrial applications, including tire manufacturing and giant oven systems used to dry automobile paint quickly. In the early 1980s, Best, a backyard griller and perpetual inventor, added a ceramic infrared burner to a barbecue grate he had fashioned for his personal use and discovered an accelerated cooking process that left fast-cooked foods succulent [source: TEC].

While the technology was quickly adapted for commercial use in steakhouses and other restaurants, it was a cost-prohibitive luxury for most home chefs until the expiration of Best's patent in 2000. Manufacturers, including Best's own company, then began introducing a new generation of moderately priced, gas- and electric-powered infrared grills aimed at attracting backyard cooks [source: Associated Press].

In 2010 alone, more than 15 million grills were shipped to retailers in North America, and the majority of them were gas grills, including infrared gas grills [source: Hearth, Patio and Barbecue Association]. Overall, infrared cooking technology has become increasingly accessible in both full-size grills and as an optional burner on standard gas grills [source: Janeway]. A 2010 survey conducted by Consumer Reports revealed that 63 percent of people with access to an infrared grill used the technology regularly [source: Consumer Reports].

If you're thinking about purchasing an infrared grill or are curious about how they work, it will help to understand how infrared heat is created -- and why it all has to do with wavelengths. We'll explain more on the next page.